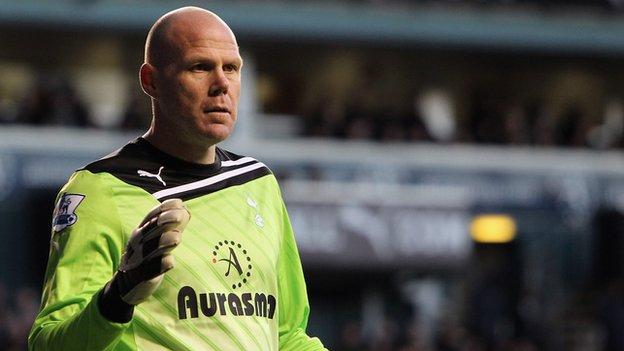 Brad Friedel believes Tottenham will have enough games to keep both him and Hugo Lloris happy this season.

Manager Andre Villas-Boas described the £8m capture of goalkeeper Lloris from Lyon on deadline day as a major coup.

But Friedel has started all of Tottenham's games since the France international captain's arrival.

"Hopefully we will have long runs in all the cup competitions so there's going to be plenty of matches to share around," Friedel said.

American Friedel, who played his 308th consecutive Barclays Premier League game in the win over Reading on Sunday, has been impressed by Lloris's attitude since arriving at White Hart Lane.

"Hugo has come in and is a really nice person," Friedel told talkSPORT.

"He's a super goalkeeper but we have two other really good goalkeepers in Heurelho Gomes and Carlo Cudicini.

"We have friendly, and healthy, competition for places.

Lloris's omission from the starting line-up has been met with astonishment in France but the 25-year-old is willing to bide his time as he looks to become the club's first-choice keeper.

"I am in an adaptation period," he told L'Equipe. "I've had very few training sessions, and there are players that I didn't know. But I am expecting time on the pitch.

"For me, it is a period to manage. Obviously I have desire. I came here to play.

"I am at the club, I know where I have to go to. I had a talk with the coach and I know everyone at Tottenham wanted me to come."