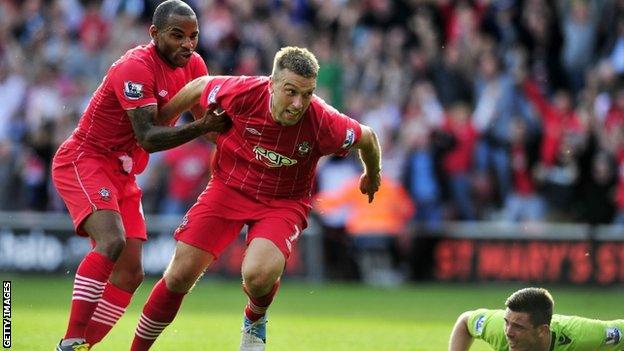 Southampton secured their first league victory of the season thanks to four second-half goals against Aston Villa.

Villa, looking for a first away win since January, took the lead through a Darren Bent toe poke from two yards.

Rickie Lambert levelled when he found the bottom corner and Nathaniel Clyne put Saints ahead by neatly finishing a fine Gaston Ramirez pass.

Jason Puncheon's effort went in via defender Ciaran Clark and Lambert then added the fourth from the penalty spot.

It was a stylish win and Southampton's first points of the campaign will give Nigel Adkins some breathing space after four Premier League matches without a victory had led to headlines linking former Liverpool boss Rafael Benitez with the Englishman's job.

Adkins, though, insisted he and his team should be judged on their performance against Villa, rather than their opening matches against last season's top three sides, and the raucous cheers at full-time suggested the home fans were more than willing to give Adkins a stay of execution.

"The chant 'there's only one Nigel Adkins' was echoing around St Mary's after their terrific second-half performance here. What a day for Saints as they get lift-off in the Premier League. Southampton are in business. What on earth did Adkins say to his players at the break? They struggled in the first half."

Regardless of their manager's pre-match proclamations, Southampton's four defeats - during which they had conceded a record-equalling 14 goals - did seem to weigh heavily on his mind.

Gazzaniga, a £2m purchase from Gillingham, could not have wished for an easier introduction as neither goalkeeper was called into action until Brad Guzan held onto an Adam Lallana overhead kick in the 30th minute.

Last year's Championship runners-up were the superior side in the first half, with the triumvirate of Lallana, debutant Ramirez and Steven Davis combining well to out-pass their opponents in midfield and create a couple of half-chances for Lambert.

But for all their creativity, lackadaisical defending once again proved to be Saints' downfall as Puncheon clumsily lost possession on the edge of the box for an error which led to Bent's first Premier League goal since February.

Villa's record signing pounced to direct a Stephen Ireland miskick beyond a helpless Gazzaniga, ensuring the visitors went into the break ahead.

The change seemed to initially pay dividends for Villa as Christian Benteke sent Bent free - only an excellent save from Gazzaniga prevented the striker from scoring a second.

Benteke went agonisingly close with a header from the subsequent corner, but that was as good as it got for the visitors as Saints scored twice in five minutes.

A beautiful first touch from Lambert helped the striker evade three defenders to squeeze the ball beyond Guzan for his third of the season, and shortly afterwards Clyne had the St Mary's faithful in full voice.

A delightful pass from £12m signing Ramirez set the youngster free and the defender's cool finish would have impressed England Under-21s coach Stuart Pearce in the stands.

Confidence was oozing through the home side as Ramirez caught the eye with wonderful passing and a third goal came in the 71st minute when Lambert put Puncheon through, his shot clipping Villa defender Clarke on the way into the net.

Southampton concluded the match - and leaped off the bottom of the table - when impressive substitute Emmanuel Mayuka was felled by Guzan, allowing Lambert to score his second of the match and his 26th penalty for the club.