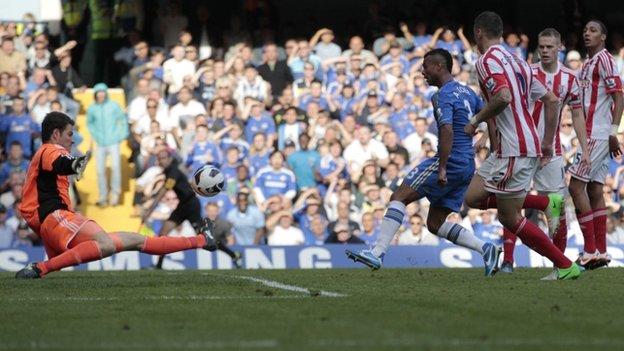 The England defender stole in with five minutes left to prod in Juan Mata's flick and keep Chelsea three points clear at the top of the Premier League.

Stoke threatened to cause an upset when Jonathan Walters headed onto Cech's crossbar before half-time.

If you asked me if this looks like a Chelsea side capable of winning the title I would have to say no. For all their possession and all their dominance, Stoke could have snatched the points here and arguably created the better chances. This remains very much a team in progress for Roberto Di Matteo.

Manager Tony Pulis threw Michael Owen on as he sensed victory, but it was Chelsea who snatched all three points.

With Chelsea owner Roman Abramovich watching from the stands after his unscheduled visit to the training ground on Thursday, the onus was on Roberto Di Matteo to win - and win well.

But against a side as disciplined and obdurate as Stoke that was never likely to be straightforward, despite their woeful record at Stamford Bridge.

The Potters last league victory there had come in April 1974, but with Di Matteo opting to leave captain John Terry and Frank Lampard on the sidelines this was not a familiar, forceful Chelsea of the recent past.

Rather than reinforce in the defensive midfield area after seeing Chelsea win the Champions League in May, Abramovich has invested in youth and attacking flair and almost all £80m of it was given its chance to shine against Stoke.

And while there was no shortage of artistry or imagination from the attacking quartet of Fernando Torres, Eden Hazard, Juan Mata and Oscar but for all Chelsea's flicks and faints, Stoke were rarely stretched.

For 85 minutes the champions of Europe were kept, in large part, at arm's length by Stoke, who arguably created the better chances.

The home side had dominated the early exchanges with the quick feet of Hazard and the vision and craft of Mata to the fore.

But Stoke, starved of possession, stood firm to create the two best chances of the opening 45 minutes.

The first, perhaps predictably, came from a set-piece, as Walters rose above the Chelsea defence to head Glenn Whelan's right-wing delivery firmly against Cech's crossbar.

Chelsea pushed and probed, but for all their flicks and flair, the lack of width in their attack allowed Stoke to remain organised and steadfast.

The best of Chelsea's chances fell to Torres in the first half, as the Spanish striker chested down Mata's clever lobbed pass only to miss his kick from six yards with only Begovic to beat.

Stoke struggled to contain Oscar too.

The Brazilian, who was booked for a dive shortly after half-time, almost made amends soon after.

He cut in, feinting and twitching to the edge of the box, slipped the ball on to his left foot but shot straight at Begovic.

And yet the visitors remained a threat, sending on Owen, Kenwyne Jones and Matthew Etherington as they sniffed a chance of a historic upset.

Chelsea kept pouring forward and, with time running out, eventually swept Stoke aside with a goal from an unlikely source.

Lampard, on as a substitute, combined with Victor Moses and Mata on the edge of the box, with the Spaniard finally flicking the ball beyond the Stoke defence with his heel to allow Cole the chance to score the winner. It was the left-back's first Premier League goal since May 2010.

The match ended on a sour note, however, with Chelsea defender David Luiz fortunate to escape a red card for a wreckless challenge on Walters.

But although Di Matteo stressed the importance of the result, it is clear the new Chelsea remains a work in progress.

Against Stoke they needed an old boy to bail them out.