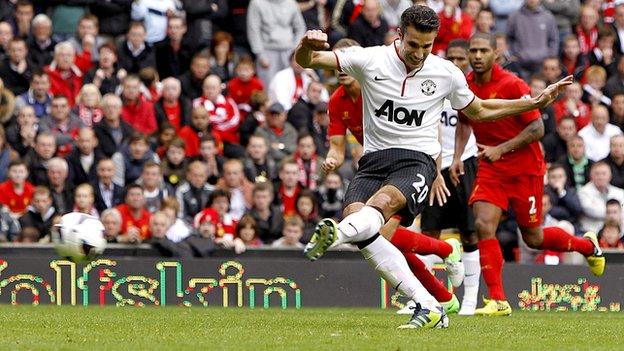 On an occasion when the Hillsborough victims and families were remembered in moving scenes before kick-off, these two great rivals produced a typically competitive and contentious encounter.

Liverpool were reduced to 10 men when Jonjo Shelvey was sent off for a first-half foul on United defender Jonny Evans - but it did not stop captain Steven Gerrard volleying them ahead seconds after the interval.

It left Liverpool and new manager Brendan Rodgers without a league win in five attempts this season and in the Premier League's bottom three, once again rueing their lack of cutting edge.

Liverpool enjoyed spells of complete domination in territory and possession but failed to make it count, leaving United, who were without centre-back Nemanja Vidic, the opportunity to take full advantage for their first win at Anfield in six games.

As expected, Anfield was an emotional arena after panel investigating the disaster at the 1989 FA Cup semi-final between Liverpool and Nottingham Forest.

The panel cleared Liverpool's supporters of blame and the build-up to kick-off was marked with a series of tributes to commemorate the occasion.

"The occasion had been impeccably observed by both clubs and by both sets of supporters until the game's conclusion.

"With the stadium virtually deserted except for the Manchester United supporters kept back in their section of the Anfield Road end, there was a brief outbreak of the chant 'Always the victims - it's never your fault'.

"It ended after a few seconds with unconfirmed reports that it was prompted by some provocation.

"The United fans were then kept back for another short period before being allowed to leave Anfield.

"It provided a blot on what was an otherwise solemn and dignified occasion but should not detract from so much of what else went on during a day when the Hillsborough families and victims were remembered."

Supporters arrived hours before the start to lay floral tributes at Anfield's Eternal Flame Hillsborough memorial and The Kop was emblazoned with a mosaic reading "The Truth" while the word "Justice" decorated the lower Centenary Stand.

The ceremonies were impeccably observed by both sets of supporters, as was the ritual of

There was no repeat of last season's scene at Old Trafford when the Uruguayan, who had been found guilty of racially abusing the United defender, refused the Frenchman's hand.

When the action did start Liverpool exerted complete control of the first half but could not find the finishing touch to compliment their fine approach work. Gerrard was closest with a shot narrowly off target at the near post as United struggled to find any fluency.

Liverpool's flow was disrupted in the 39th minute when they lost Shelvey as he was shown a straight red card by referee Mark Halsey for a reckless lunge at Evans that left the United defender requiring treatment.

Rodgers replaced Fabio Borini with Suso at the start of the second half and he was instantly involved as Liverpool claimed the lead they deserved. He showed confidence on the flanks and the move, which also included clever work from Johnson, ended with Gerrard sweeping a left-foot volley past Anders Lindegaard in front of an ecstatic Kop.

United, who had brought Paul Scholes on for Nani to provide a measure of order to their midfield, were quickly level as Shinji Kagawa chested Valencia's cross into the path of Rafael, who curled a superb finish beyond the stretching Pepe Reina.

United had stabilised after that poor first half but it was still against the run of play when they went ahead from the spot - and Liverpool's undoing was all their own work.

Daniel Agger and Johnson collided on the halfway line to concede possession, allowing Valencia to race forward. The run ended with Johnson upending the winger in a desperate attempt at recovery.

To make matters worse for the home side, Agger was hurt in the clash was taken off on a stretcher before Van Persie finally converted the penalty, despite Reina getting a hand to his powerful effort which found the top corner.

Liverpool had run out of steam, ending with nine men after Martin Kelly was injured, allowing United to close out an important win.