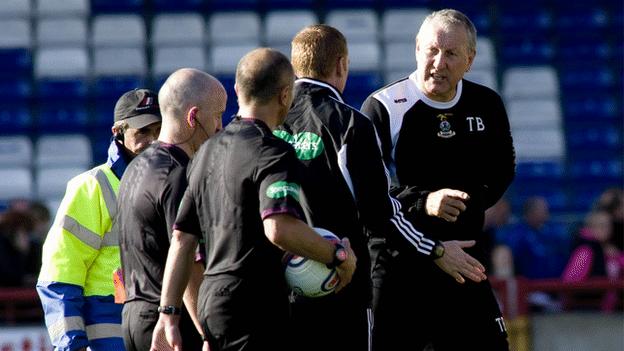 Terry Butcher is glad he is not playing any more as his frustration with referee George Salmond reached boiling point.

The Inverness Caledonian Thistle manager thought his side were denied a second penalty and should not have had a red card in the draw with Aberdeen.

"If I was playing now, I would be up on an assault charge, if not more," the former England captain said with tongue in cheek.

"Referees are the most inconsistent people that I have ever seen."

Caley Thistle took the lead through a Richie Foran penalty after Shane Sutherland had been fouled by Russell Anderson.

Anderson was understood to be distraught, believing he had got the ball, and the Aberdeen camp hotly disputed the award and the defender's red card.

Butcher believes the referee got that one right and should have awarded another when Aaron Doran was challenged by Mark Reynolds with the score still 1-0.

"We should have won the game, but the referee has not given a penalty for a foul on Aaron Doran," said the manager.

"It was a great chance to go two up and the referee doesn't give it.

"He says my player scuffed his shot and fell over. Anyone on this planet will have seen that as a penalty.

"A Martian would have seen it was a penalty."

Butcher also criticised the red card shown to Owain Tudur Jones for a tackle on Ryan Fraser before the opening goal.

"It was a very poor decision," Butcher said. "He has telescopic legs and it was just shin to shin.

"It was never a red card in a million years.

"The officials are in charge of our futures and my job - and they are letting us down."

Butcher, though, praised his side, despite them sitting joint-bottom of the Scottish Premier League without a league win this season.

"I thought we were magnificent," he added.