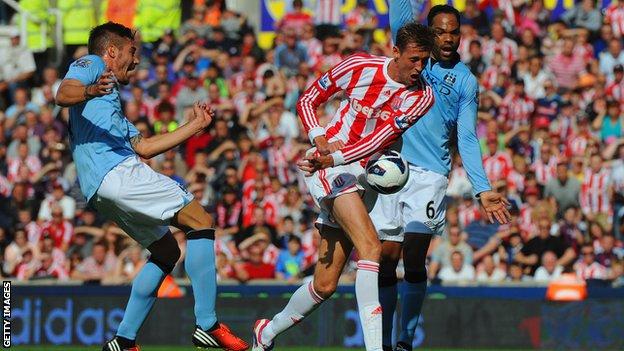 Although Javi Garcia equalised, Mancini said for Crouch's goal "you should talk about NBA basketball, not football".

"I don't understand how it's possible the referee didn't see it," he added.

"I didn't see this from the bench but I saw all my players wanted to talk with the referee.

"The incredible thing was the referee was behind Crouch. Sometimes it can happen that the handball is not voluntary, but not today."

City fly to the Spanish capital on Monday to prepare for Real Madrid with doubts over Sergio Aguero's fitness.

Although the Argentine forward has returned to training after injuring his knee in City's opening game of the season, the 24-year-old did not feature against Stoke.

Mancini refused to be drawn on whether Aguero, who scored 23 league goals last season, will be available for the game at the Bernabeu for City's first Group D fixture.

Instead the Italian opted to draw on the positives against Stoke, the visitors denied a stoppage-time winner when Ryan Shawcross made a goal-line clearance to keep out Edin Dzeko.

Manchester City have failed to win in all five Premier League visits to Stoke, drawing each of their last four 1-1

"I think that Garcia scored an important goal and he had another chance," said Mancini.

"He played well. Like Maicon, it was the first game for them and I think both players did a good performance.

"They don't know their team-mates yet and for a first game they did well."

Stoke manager Tony Pulis brushed off the controversy surrounding Crouch's third goal in as many games.

"I've been told that Crouchy handled the ball, but if we've had a decision go our way against one of the top clubs then I'm absolutely delighted," he said.

"Looking at the major incidents in the game, we seem to have had the run of the ball, but I felt the players thoroughly deserved that bit of luck."

Former Real Madrid striker Michael Owen made his Stoke debut as a 90th-minute substitute after joining the club on a one-year contract.

"It was nice for him just to get a feel for the crowd," added Pulis, whose side have drawn all four league games this season. "We want to get him in the team."