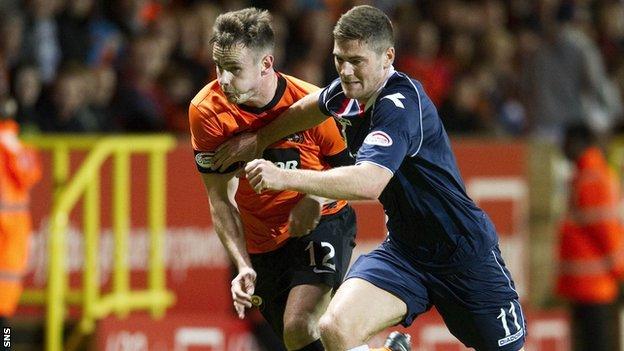 Ross County Derek Adams feels his side have dealt admirably with a "difficult" beginning to their debut Scottish Premier League season.

County extended their unbeaten run in league football to 40 matches with a draw against Dundee United - the Staggies' fourth 0-0 result this term.

In the end I think it's a fair result overall

"To go unbeaten and move up the league again, we're delighted," said Adams. "It's a great record.

"It's another good performance and another point along the way."

Colin McMenamin had several chances for the visitors at Tannadice but Dundee United finished strongly and keeper Michael Fraser made several saves late in the match.

"I thought we dealt well with the pressure Dundee United put us under towards the end of the game," added Adams.

"They had a lot of corners and crosses into the box. That was always going to be the case.

"In the end I think it's a fair result overall."