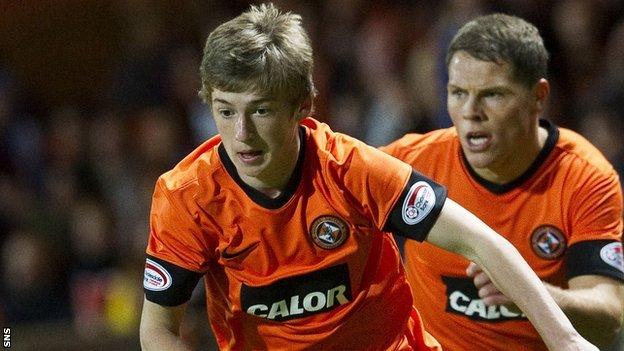 The 16-year-old appeared as a late substitute as United chased a winner.

I thought we dominated it from start to finish

"He's a talent," Houston told BBC Scotland. "He's one of a conveyor belt of young players that we need to breed and need to bring on.

"He can go past people as if they're not there. I'm disappointed we never got three points but I can't ask for anymore from a young, young side."

"If you take a guy who scored 20-odd goals out the team and a guy who provided probably 30 of our 60 goals last year - Daly and Mackay-Steven - it makes it difficult," added the United boss.

"I'm glad that we brought Gregory Vignal in because, although Brian McLean had an excellent game at left-back, we need experience.

"Frustrating night for the fact that we didn't get the goal that I thought we deserved.

"I thought we dominated it from start to finish. We lack a physical presence with Jon Daly not in the team but I'm really pleased with the boys, it's a young side and they showed up brilliantly."

Meanwhile, Houston believes "it could be a couple of weeks" before Daly is available.