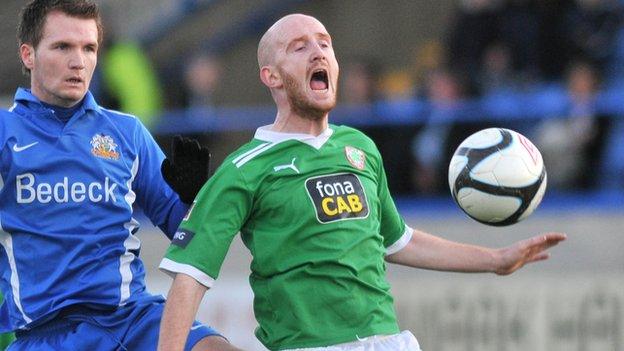 Cliftonville midfielder Ryan Catney will miss the Premiership game against Linfield because of a hamstring injury.

Conor Devlin, Ciaran Caldwell and Joe Gormley return to the squad as the Reds look to bounce back after the 1-0 defeat by Ballinamallard last weekend.

"A sign of a team's strength is how they respond to a defeat so this is a massive test for us," said Cliftonville boss Tommy Breslin.

"Our results have largely been good so far but not our performances."

Linfield impressed in their 4-2 win at Portadown last Saturday, but they are three places and three points before the Reds.

"We are coming up against a very talented Cliftonville team," Blues boss David Jeffrey told the club website.

"We will have to be our best to get something from the game and it presents a big, big challenge."

The last four league games between table-toppers Coleraine and Glentoran have ended in a draw and the Bannsiders are without suspended defender Kyle McVey for the Oval encounter.

Ballymena United striker James Costello is set to miss the Showgrounds game against Dungannon Swifts after picking up a knock in a midweek reserve match.

The good news for Sky Blues boss Glenn Ferguson is that Richard Vauls is available after injury while Jordan Baker may return following a lay-off.

Crusaders captain Colin Coates is sidelined for two weeks after suffering a recurrance of an ankle injury so he misses Seaview meeting with Donergal Celtic.

Northern Ireland U21 defender Josh Robinson is back in the Crues squad after being away on international duty.