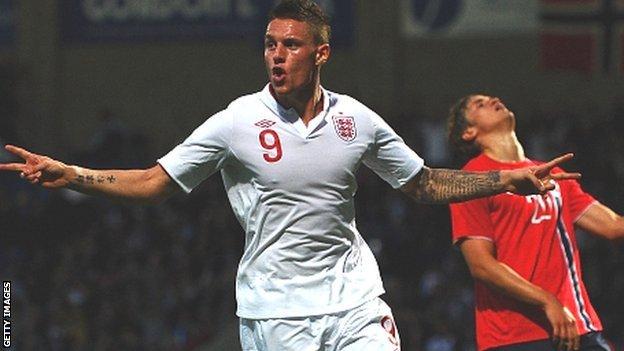 England will meet Serbia in a two-legged play-off to decide which nation will qualify for next summer's Under-21 European Championship in Israel.

Stuart Pearce's side were seeded for the draw, ensuring they would avoid Germany, Spain and Netherlands.

England are expected to be at home for the first match on 12 October, with the return game to be held four days later.

"It's a difficult tie for us, but when you are down to the last 14 in Europe you know you are not going to get an easy draw," said Pearce.

"People would have looked at the draw and hoped for a runner-up, but the runners-up all made it to the finals last time, which shows the strength of the competition."

England are aiming to qualify for the biennial tournament for the fourth time, having been the only team to have qualified for the previous three events.

That record, combined with finishing top of their group with seven wins from eight matches, ensured England's place as a seeded team for the play-offs.

Pearce's side drew with the eventual champions Spain in the group stages of the 2011 tournament, but were knocked out as result of a 2-1 defeat by the Czech Republic.

England's last triumph was in 1984 when Mark Hateley, who went on to play for AC Milan, Monaco and Rangers, was named player of the tournament.