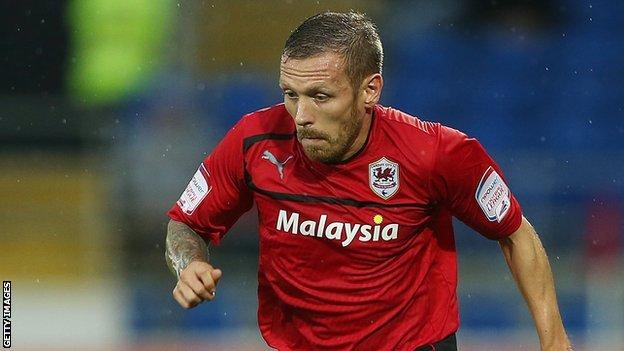 Craig Bellamy is poised to figure for Cardiff City in Saturday's home Championship clash with Leeds United after being "immense" in training.

The striker has recovered from the calf tear that saw him miss two Cardiff matches and two games for Wales.

"Craig has trained with me every day and is not in a bad state of mind at all," Mackay said.

"He had a nasty calf tear which has kept him out and stopped him training until Monday of this week.

"So he's had four days' training so far and, that being the case, we'll be very cautious and careful, but at the same time the last two days he's looked immense out there and he's trained really well, and he's in my squad for tomorrow [Saturday]."

The striker, 33, joined his hometown club in August from Liverpool on a free transfer, signing a two-year deal having previously played for Cardiff on loan.

As well as his calf problems, an article in the Sunday Mirror quoted Bellamy as saying that he had lost his appetite for football and was still struggling with the death of close friend Gary Speed, the former Wales manager.

But Mackay says that Bellamy is eager to get back on the pitch, again dismissing rumours the striker was considering retiring.

"That's not the case," Mackay added. "That was a news article, not a sport article, a news article that was chopped up from various things and not an interview with Craig, so no."

Defender Ben Turner is a doubt for the Leeds match after suffering a tear on the sole of his foot, while midfielder Kadeem Harris took a "real nasty knock" on his ankle in training and misses out.

Although they will not figure against the Bluebirds' promotion rivals Leeds, there is good news on midfielder Stephen McPhail and striker Rudy Gestede who have started training again after injury.