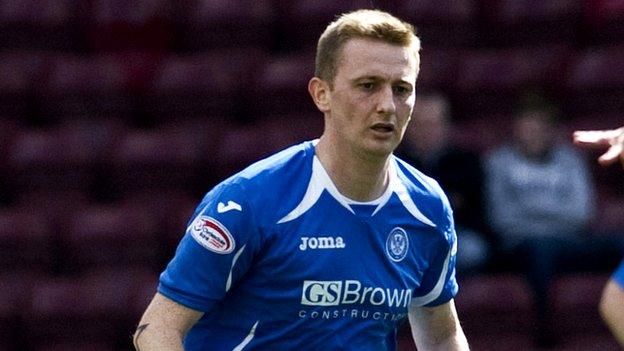 Kilmarnock manager Kenny Shiels has ruled out making a move for Derek Riordan despite the former Hibernian striker training with the club.

The 29-year-old left St Johnstone in May and had joined up with the Ayrshire club after a training spell with Ross County failed to lead to a deal.

However, the Kilmarnock manager played down speculation of a deal for Riordan.

"He's an out-of-contract player who we are facilitating, that's all," said Shiels.

"We have done it with Mark Kerr and loads of players who want to keep their fitness up until they get fixed up."

Riordan had also trained with Killie in January after leaving Chinese side Shaanxi Chan-Ba, before signing for Saints in March.

However, Shiels could add new signing Cillian Sheridan to his squad to face Hibernian, depending on the former Celtic and St Johnstone striker's fitness.

"I have to have a chat with him about that," Shiels said.

"He has done a pre-season with Sofia and I need to work out if he has enough game time to come in."

And the Killie boss revealed his delight at attracting Sheridan to the club, after he left Bulgarian side CSKA Sofia.

"There were other more lucrative offers for him, I want to stress that," he said.

"His agent worked in close contact with myself and he felt it was a good move for him to come here at this time of his career.

"I concur with that, I really think we've a chance to develop the player.

"That's our priority, to improve players. If we have enough intelligence about us the team will become better."