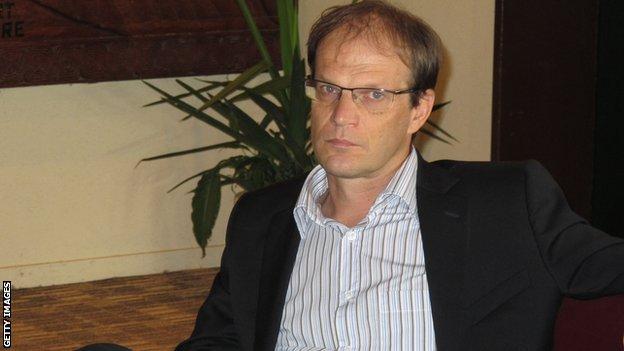 Cameroon have sacked coach Denis Lavagne only three months into the Frenchman's contract.

The decision was taken by the country's Minister of Sports and Physical Education, Adouma Garoua.

It follows the team's poor recent results, the latest being a 2-0 defeat by Cape Verde in a 2013 Africa Cup of Nations qualifier on 8 September.

Jean Paul Akono, who guided Cameroon to Olympic gold in 2000, has been installed as interim coach.

He has the immediate and daunting task of inspiring the team to overturn that two-goal deficit against Cape Verde when they host the Blue Sharks in the second leg of the final-round qualifier on 13 October.

Lavagne only signed a permanent deal in June, having been caretaker manager since last November following the sacking of Javier Clemente after the Spaniard failed to secure qualification for the 2012 Africa Cup of Nations.

After the first-leg loss to Cape Verde, Lavagne went directly to Paris and his dismissal has come as no surprise given the demands of the Cameroonians.

His objective was to ensure Cameroon qualified for next year's tournament in South Africa but that looks in danger now. In addition, Cameroon have slipped to 61st place in the Fifa world rankings.

Sports Minister Garoua said in a statement: "Lavagne has been suspended as head coach but will continue to receive his salary until 31 October when his contract expires."