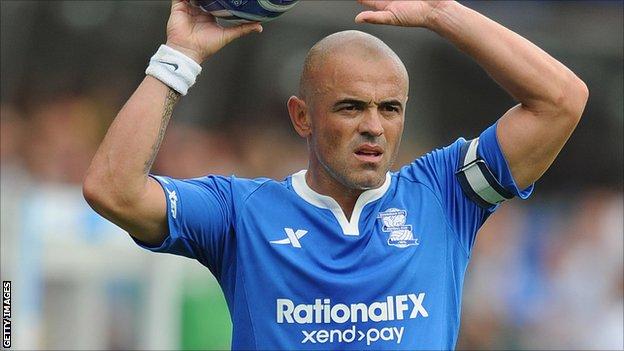 Carr, 35, who has been sidelined with the injury since January, signed a new one-year deal with Blues this summer.

But, having failed to recover from a thigh injury in the pre-season friendly with Royal Antwerp, a scan showed up the full extent of the problem.

Just when he was on the verge of making a comeback, he picked up a thigh strain against Antwerp - and, having opened him up, they found quite a bit of damage

"It's a massive blow for him as he's worked ever so hard to get back - and for me," boss Lee Clark told BBC WM.

"It's not just because he's the captain and a fantastic leader, but also because he's still a terrific player, who is an example to the others.

"He's had ongoing problems with his knee, with a cartilage problem.

"Then, just when he was on the verge of making a comeback, he picked up a thigh strain against Antwerp - and, having opened him up, they found quite a bit of damage.

"He's now had surgery, which will keep him out for a minimum of six months."

The 44-times Republic of Ireland right-back came out of retirement to join Blues on a short-term deal in February 2009, having quit football two months earlier after leaving Newcastle following a string of injuries.

But he has since gone on to make 121 appearances for Blues over the last three seasons.

Blues have two of their injured players - Curtis Davies and Kevin Fahey - back in full training.

But they still have a doubt about Darren Ambrose, who missed the 1-0 home win over Peterborough a fortnight ago.

He will be assessed before Clark picks his team to go to Nottingham Forest, where Blues will be looking to pick up their first away point of the new Championship campaign on Saturday.