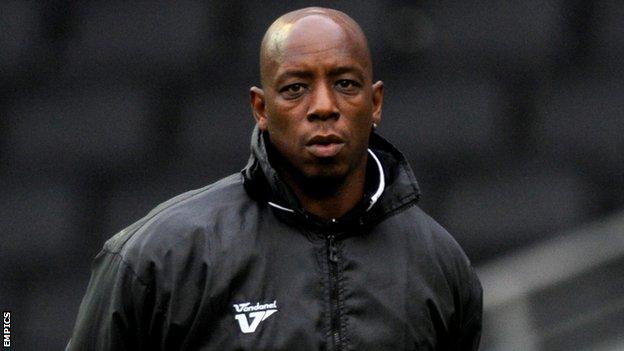 Ian Wright has shown a video of his goals to MK Dons strikers in an effort to improve their goalscoring abilities.

The Dons failed to score in their last two games and Wright, who joined the club as a coach in May, has tried an innovative way of helping the players.

"We did a classroom session with some of the forwards," Dons boss Karl Robinson told BBC Three Counties Radio.

"Wright was going through some of his goals and what his thought process was when getting into certain areas."

The Dons boss continued: "I showed my daughter and she said 'Are you signing him, dad?' and I said 'no, that was Ian Wright when he was younger'.

"He's certainly helping out, the boys love him and to work on that was a unique opportunity for them to have that insight."

However Robinson has been impressed by his players' determination to push higher up the table by volunteering themselves for two extra training sessions this week.

"They all came in on their day off by no pushing and shoving from us. They phoned us and said 'can we have another session?' so they brought themselves in," he said.

"They seem to be in a really good frame of mind. They said 'we should be better, we should be top'. But we haven't done much wrong.

"They say they want to be the best they can be, which is a tremendous credit to the football club."