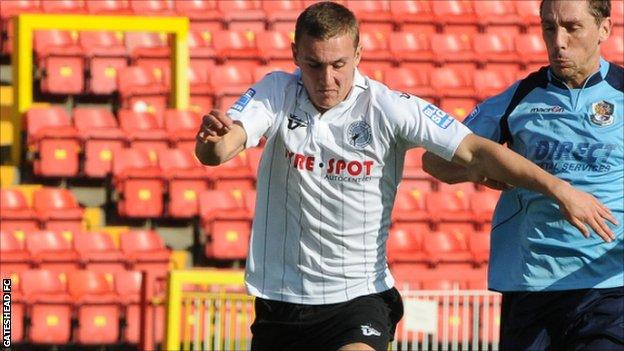 Gateshead have extended the stay of striker Ryan McGorrigan by a further month after he impressed manager Ian Bogie in training.

The 19-year-old, released by the Newcastle United Academy in the summer, joined the Tynesiders on a one-month deal in August after a trial spell.

"He has acquitted himself well in training and has worked very hard," said manager Ian Bogie.

"He has good technical ability and is a good finisher."

Bogie's options in forward areas have been limited by the injuries and subsequent surgery required by Liam Hatch and James Brown.

"Hopefully he will continue to progress over the next month," Bogie added.

"When he has come on in games he certainly hasn't looked out of place.

"He has to be patient but opportunities will arise for players on the fringes."