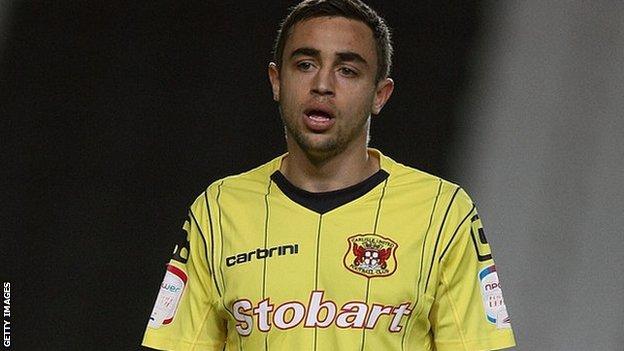 Tom Taiwo, once involved in a controversial £5m move to Chelsea, has won a two-year contract with Hibernian.

Chelsea paid compensation to Leeds United for Taiwo and fellow midfielder Michael Woods after being accused of tapping up the youth players.

Hibs boss Pat Fenlon hopes the 22-year-old will add quality to his midfield.

"He's a good player. He's good on the ball. He gets it and he moves things quickly and keeps it simple," said Fenlon of the former England youth cap.

We felt we were a little bit light in midfield

"He has a fantastic attitude and we're delighted to get him in."

Fenlon wants the player who rejected a new contract with League One outfit Carlisle to provide competition for Jorge Claros and summer signing Gary Deegan with Lewis Stevenson having suffered injury.

"We felt we were a little bit light in midfield," said the Hibs manager of the player who had a successful trial.

"When Lewis got injured, we went into games with Deegan and Jorge and nobody on the bench that could play in a central midfield position.

However, Taiwo will not make his debut in Saturday's Scottish Premier League clash with Kilmarnock in Edinburgh.

"He hasn't done loads of training," Fenlon added. "It will probably be a week, 10 days, before we consider him to be fit enough to get involved."

Taiwo suffered a broken leg early in his stay with Chelsea and, like Woods, who moved on to Yeovil Town, failed to break into the first-team with the Premier League outfit.

Following loan spells with Port Vale and Carlisle, he signed for the latter in 2010 but rejected a new deal this summer saying he wanted to move closer to his native Yorkshire.