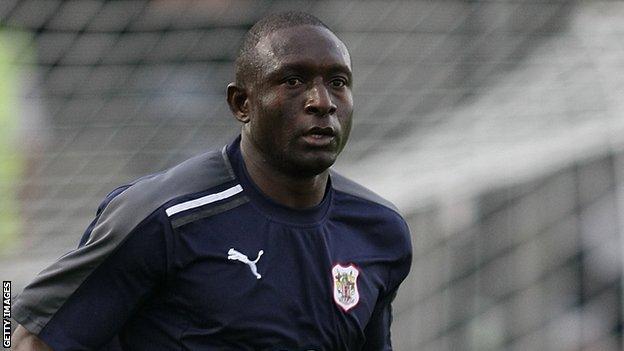 Plymouth Argyle's loan striker Guy Madjo has been impressed by his new manager Carl Fletcher in his first week at the League Two club.

Madjo played 25 minutes of last week's Devon derby with Torquay after signing from Aldershot the night before.

I know myself and what I can deliver, I think people will definitely see more of me

"I can't believe how fantastic the manager is, I'm learning a lot from him," Madjo told BBC South West.

"No disrespect to the other managers I've played under, but I've never had someone like this."

Madjo continued: "He's been in the game and he knows what he's talking about. It's a good set-up here compared to so many places I've been to."

The former Cameroon Under-23 international made the loan move to Home Park as he found , despite scoring eight goals in 20 appearances last season.

The 28-year-old also went on loan to Saturday's opponents Port Vale last year, where he scored four goals in six games, including a hat-trick against his parent club Aldershot.

"I know there's more from me to come. I know myself and what I can deliver, I think people will definitely see more of me," he added.