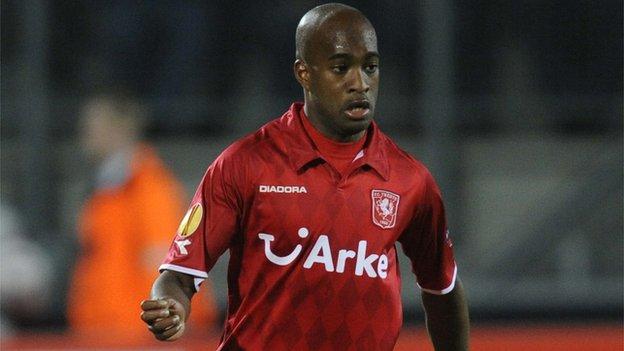 Dwight Tiendalli is determined to prove his quality to and make the most of his opportunity at Swansea City.

Wales international Taylor has been ruled out for the season after breaking his ankle against Sunderland the day after the transfer window closed.

"I want to show my quality to everyone at Swansea," said Tiendalli.

"I hope I can put some pressure on the squad. Swansea have a lot of injuries.

"I was a free agent and I had a couple of opportunities but I wanted to play in the Premier League and I have waited a long time for this opportunity.

"It was the right moment, because if it was later, I was going somewhere else."

Tiendalli, 26, was signed on a free-transfer until the end of the season after he was released by FC Twente.

He began his career at Ajax before transferring to FC Utrecht in 2004 and moving to Feyenoord in 2006.

He joined Twente in 2009 and left the club at the end of last season.

"It was a beautiful opportunity for me that Michael Laudrup [Swansea manager] has come to me and asked me to play here," said Tiendalli

"It's a great opportunity because I want to play in the Premier League and it's a good club to play for.

"The way Swansea play is the way we play in Holland at FC Twente. They play good football from the back, to midfield and to forward. I like the way they play."

Tiendalli could make his Swans debut in Saturday's match at Aston Villa, who have one point from three games.