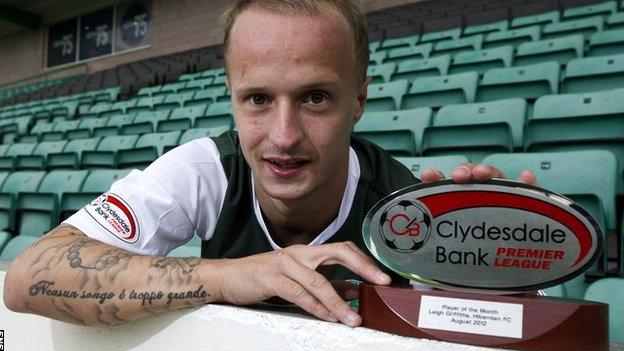 Hibernian forward Leigh Griffiths has been named the Clydesdale Bank Premier League Player of the Month for August.

The striker netted three goals and helped steer the Edinburgh outfit to second in the table.

Griffiths scored twice in a 2-1 win over St Mirren and also netted in the 1-1 Edinburgh derby draw at Easter Road.

Griffiths, who began his senior career with Livingston before moving on to Dundee, is in his second loan spell in Edinburgh from Wolves.

Fenlon, who confirmed that Griffiths will be fit to face Kilmarnock despite withdrawing from Scotland Under-21 duty through illness this week, said the player had worked hard during pre-season.

"I don't think his work-rate is ever in question," said the manager.

"We're trying to get his head down a little bit more and concentrating on his football.

"Last week was a big plus for him, because he got called back into the under-21 squad and he got the player of the month."