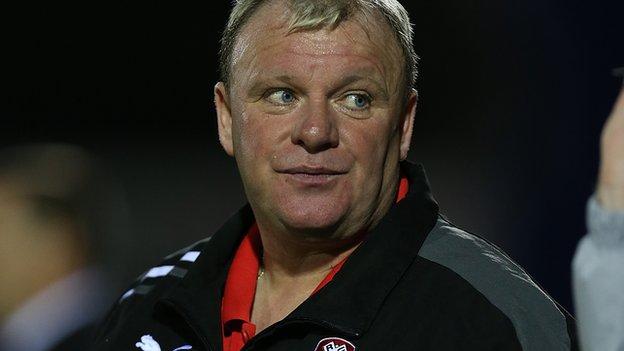 Rotherham boss Steve Evans says he will not change after his six-match stadium ban by the Football Association.

The 49-year-old was banned for using abusive and insulting words and behaviour with a reference to gender.

"It won't change the passion and the drive and commitment that I have," he told BBC Radio Sheffield.

"It'll be hard for me, that's why it was done, but it won't affect the players because they're professional and they'll get on with business."

On Saturday, Evans will conduct the team talk in a hotel before going to watch Rochdale, who the Millers play in midweek, and leave assistant Paul Raynor in charge of first-team affairs, including substitutions.

"I'll be speaking to my staff on the bench on the phone," he added.

"I've got experienced staff and I'll let them get on with their jobs. Paul will be making the decisions as the game goes forward and the one thing I know is that he will be making them with the right intentions."

The Millers, pre-season favourites to win promotion from League Two, were hammered 6-2 by Port Vale last week to sit in 10th after five games.

Despite the poor result Evans is not intending on making wholesale changes for the visit of Torquay.

"Given what happened last week it's even harder for me not to be involved but we've only had one bad 30 minute spell in five games," he continued.

"There'll be one or two changes but you don't throw everything you've done out of the window because of one bad result."