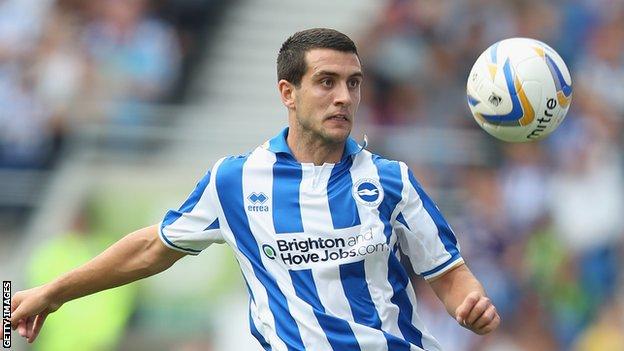 Brighton midfielder Gary Dicker says their recent signings will bolster their hopes of a promotion push.

Dicker told BBC Sussex: "It's always good to see players coming in and obviously it's going to improve the team and the club.

"We want to be up there. Last year when we had injuries we suffered a bit but I can't see that happening this year."

Dicker faces renewed competition in the midfield after Brighton added Dean Hammond, David Lopez and Andrea Orlandi to their squad before the transfer window closed to compliment the return of Andrew Crofts.

"The gaffer [Poyet] likes to sign players who can play in more than one position and I think that can help," Dicker, 26, said.

"Everyone is on their toes and the standard in training has been raised.

"As new players come in, everyone gets a lift and everyone is looking to play.

"If we can get everyone fit we've got a very good squad."

Brighton were involved in a relegation battle in League One when Dicker joined the club, initially on loan, in March 2009.

Now playing in the Championship in a new stadium, the Irishman says the club has been transformed since Gus Poyet was appointed manager almost three years ago.

"It's been an unbelievable journey, for the club and myself as well," he added.

"The way this club has progressed over the last few years has been phenomenal really, with the gates we are getting and the season tickets we have sold.

"Everyone has to step back every now and then and take a look at where the club has come from."