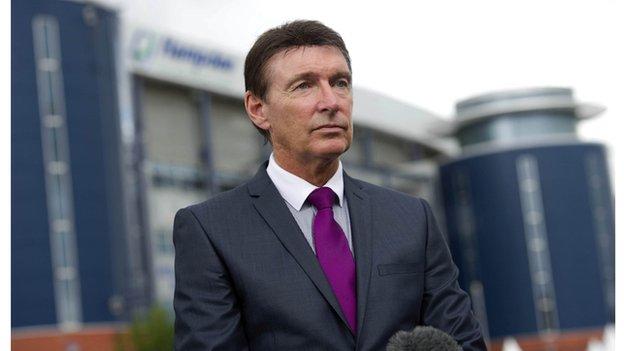 The national team have made a poor start to their World Cup qualification campaign, picking up just two points from their opening two home matches.

Craig Levein will always be the one who takes the stick if it doesn't work out.

Next month they travel to face Belgium and Wales.

"We have to let him have these two games, just to see how things are progressing," Smith believes.

Scotland drew with Serbia on Saturday and Macedonia on Tuesday but Smith, who served as chief executive of the national association for almost three years until April 2010, believes there are reasons to be positive.

"The way the group is you could pick up points anywhere. We've got a better squad of players than we've had for some time," he added.

"We have players playing at a high level in English football now, which we didn't have for a few years."

Scotland now face a trip to Belgium after a game away from home against bottom-placed Wales. It is a game that former Brighton and Rangers striker Smith believes will present Scotland's best chance of picking up points.

"Wales have been a major disappointment so far," Smith mused.

"They have no points so they have to get things going as they've had a much worse start than us.

"They'll be desperate to get a result, and they've had good results against Scotland in recent years. We've always found it difficult against Wales."

After facing Holland and Spain in their last two qualification campaigns, Scotland's group this time lacks a true footballing super-power.

"This is a group that we should be capable of competing in, and that's why there is disappointment," Smith commented.

"Craig Levein will always be the one who takes the stick if it doesn't work out."

A tight group may, however, work in the Scotland manager's favour.

"I do believe personally it's too early, I don't think it would be fair to remove Craig Levein at this stage," pondered Smith.

"I don't think it is fair, but some people will point out that he's been in the job almost two years."