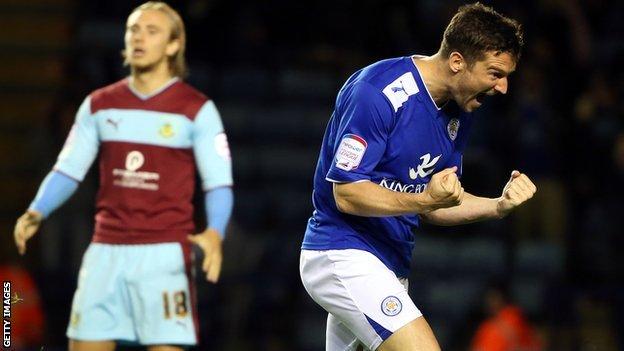 Leicester struck twice in 10 minutes to beat Burnley and maintain their perfect home record in the Championship.

Dean Marney's early goal put the Clarets, who are still to pick up a point on the road, in front.

But David Nugent levelled two minutes into the second half before Jamie Vardy sealed the points soon afterwards.

It was enough to see the Foxes climb to 10th in what was a welcome win for manager Nigel Pearson after defeats in four of their previous five games.

The Clarets took a 10th-minute lead when Martin Paterson broke down the right and crossed for Marney to rifle in from 10 yards for his second of the season.

The hosts went close when Nugent's long-range curler hit the post, but after the break he finally scored his first goal of the season.

Marshall hurled a long throw into the area, Vardy flicked on and Nugent pounced to bundle home from close range.

The turnaround was complete 10 minutes later when Vardy controlled Anthony Knockaert's pass and netted from a tight angle.

The visitors came within inches of levelling in the final 10 minutes when Sam Vokes latched onto a loose ball, but his snatched effort grazed the post.

Leicester assistant manager Craig Shakespeare: "We are very pleased with the result.

"I am delighted for the players in terms of the spirit and courage they showed because the fans made their feelings known at half-time, and I think that was more born out of frustration with the scoreline than the performance.

"The goals gave us the platform to go on, and maybe we also had a bit of luck tonight as well."

Burnley manager Eddie Howe: "We came with a gameplan and I felt we frustrated Leicester in the first half.

"But the killer blow for us was to concede straight after half-time. The manner of the goal as well was hugely disappointing from our perspective considering how well we had defended in the first half. Their second goal was a huge deflection and there was nothing Lee Grant could have done about it.

"I am concerned about the fact we have not got a point away from home. But many sides are finding it hard to win away."