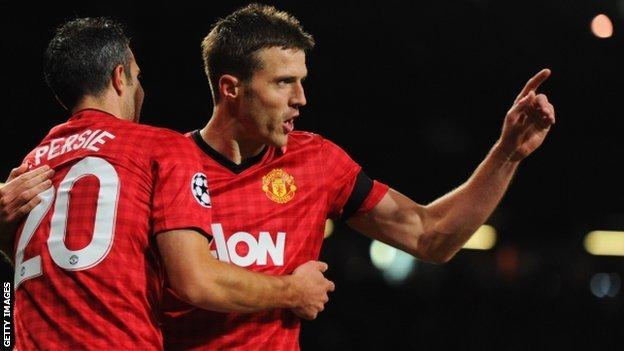 Manchester United survived a scare from Galatasaray to win their opening Champions League game in Group H thanks to Michael Carrick's early goal.

The Turkish side were denied what appeared to be a clear penalty when Nemanja Vidic fouled Umut Bulut.

Carrick put United ahead after a neat move but they saw Galatasaray hit the woodwork three times as Nani saw a weak spot-kick saved by Fernando Muslera.

Darren Fletcher came off the bench for his first game after 11 months out.

And the return of their influential midfielder for the final 11 minutes, following a long lay-off with an inflammatory bowel condition that had seemingly threatened his career, was by far the best thing about United's evening other than the three points.

Although they held on to give Sir Alex Ferguson his 100th win as a manager in Europe's elite club competition, United brought up the century with a performance that was a long way below the glittering standards they have set in the past.

Despite Ferguson's pre-game proclamations of a renewed focus from his side, this was a display more reminiscent of their disastrous form in Europe last season, when they won only one Champions League game at Old Trafford, drawing twice against supposedly inferior opposition, and ended up finishing third in their group.

Manchester United have already missed three penalties this season - as many as they did in the whole of the 2011/12 season.

Javier Hernandez (against Wigan), Robin van Persie (against Southampton) and Nani (against Galatasaray) have all been unsuccessful from the spot.

United's first wobble came after barely 30 seconds, when Galatasaray had loud and convincing appeals for a penalty turned down. Vidic brought down Bulut inside the area after the Turkey striker nipped in to intercept Patrice Evra's poor pass, but referee Wolfgang Stark waved play on.

There appeared no such problems at the other end, where the recalled and refreshed Robin van Persie and Shinji Kagawa were quickly into their stride.

Muslera rushed off his line to deny Nani early on but he could not stop Carrick from finding the net after seven minutes, following a neat build-up.

Carrick exchanged quick passes with Van Persie and Kagawa before rounding the keeper and firing home despite being tripped by the Galatasaray keeper.

But that was as good as it got for the home side, who began giving the ball away and gifting their opponents chances.

United - who wore black armbands in honour of the two female police officers shot and killed in Greater Manchester on Tuesday - were almost punished when a misplaced Paul Scholes pass allowed Galatasaray to break and the hosts were grateful to see Nordin Amrabat's looping shot come back off the top of the bar.

More opportunities for the visitors followed, with Hamit Altintop grazing the outside of David de Gea's post with a fierce drive from a clever free-kick.

After the break, Nani should have made the points safe from the spot when Rafael was brought down inside the box but his penalty was easily pushed away by Muslera.

And Galatasaray went close again soon after when Selcuk Inan met Altintop's cross with a looping header which flicked off the post with De Gea again beaten.

United's keeper, recalled after a two game absence, proved his worth when he made a fine double stop from Burak Yilmaz and Emre Colak.

United had chances to close the game out, but Javier Hernandez was guilty of some uncharacteristically poor finishing late on.

They also had their own penalty appeal turned down when Antonio Valencia was caught by Dany Nounkeu, but in the end Carrick's goal proved just enough.