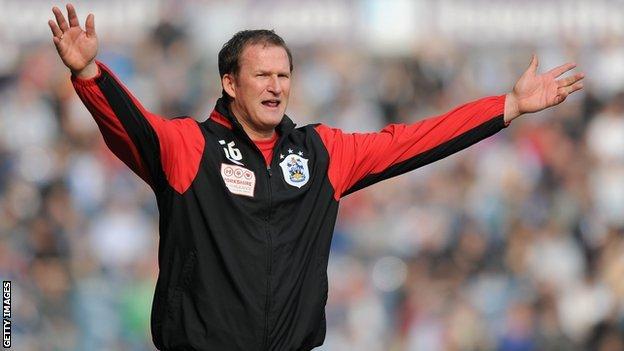 Town took a two-goal lead through Oliver Norwood, who scored on the rebound after his initial penalty was saved, and Lee Novak's header.

Reda Johnson's header made it 2-1 and Town had Joel Lynch sent off for a late tackle, but Wednesday's Joe Mattock was then red carded for a second booking.

Adam Clayton scored the third from the spot after a handball in the area.

The game was the first to be played at Wednesday's stadium since the findings of last week's independent report into the Hillsborough disaster cleared Liverpool supporters of blame for the deaths.

A minute's silence, impeccably observed by both sets of fans, was held before the match to remember the 96 Liverpool fans who lost their lives as a result of the tragedy in 1989.

Huddersfield were handed a penalty when Jack Hunt was brought down in the area by Jermaine Johnson after James Vaughan's excellent half volley rebounded off the crossbar.

Norwood saw his initial spot kick saved by Owls keeper Chris Kirkland but was quickest to respond to tap home the rebound.

Wednesday hardly had time to regather their composure when they found themselves 2-0 down, Novak showing excellent movement to head home Danny Ward's centre.

Johnson reduced the arrears with a header from a Jose Semedo long throw before Town were reduced to 10 men when Lynch needlessly scythed down Antonio on the touchline.

The teams were soon level, in terms of players at least, after Mattock pulled a rampaging Ward back and was sent off for a second bookable offence on the stroke of half-time.

Home substitute Nejc Pecnik came close to equalising for the Owls after the break before Town were awarded a second penalty in controversial circumstances.

Referee Graham Salisbury had initially waved play on after Hunt's cross hit Rhys McCabe's hand but awarded the spot kick after speaking to his assistant. Clayton stepped up this time and made no mistake.

Dave Jones's Wednesday side have now lost three in a row as they surrendered their perfect home record, while the Terriers have moved up to sixth.

"We can't let people get across us, we can't get shoved off the ball. They have two balls into the box and score two goals and that can't be right.

"We've got to be a bit stronger and a bit better than that. We can't blame people up front and people in midfield.

"The defence have got to look at themselves and say are we doing enough and they're not."

Huddersfield boss Simon Grayson: "To come here and win the game 3-1 is obviously fantastic for us.

"We played quite well when we had the ball and withstood a lot of pressure with balls into the box and set-pieces.

"We're delighted to get a win here because it's not an easy place to come. It was an eventful night for both sets of supporters and managers."