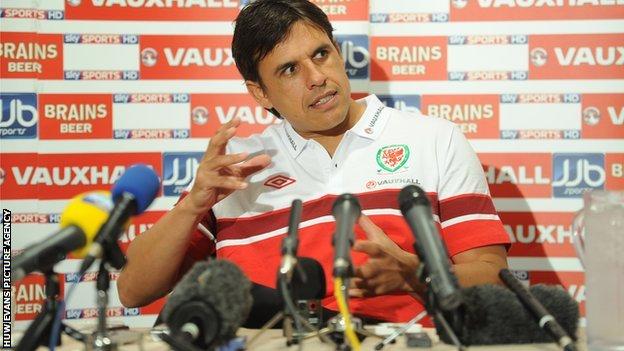 The lack of a win - or a goal - is weighing on manager Chris Coleman's mind ahead of their 2014 World Cup Group A qualifier against Serbia.

Wales's run of defeats under the new manager continued in their 2-0 Group A opening defeat by Belgium on Friday.

"It does weigh on your mind, I'm not going to lie to you," said Coleman.

After taking a backseat as Wales lost to Costa Rica in a tribute match to late manager Gary Speed, Coleman has presided over three successive 2-0 defeats to Mexico,Bosnia-Hercegovina and Belgium.

Six regulars were missing for the defeat to Belgium, while defender James Collins was sent off after just 26 minutes.

Joe Allen could return from illness to face Serbia and Coleman believes his side has plenty of talent to trouble Serbia.

Coleman acknowledges Belgium, Croatia and Serbia, who opened their campaign with a 0-0 draw away to Scotland, are more fancied than his side to progress from the group.

But Serbia manager Sinisa Mihajlovic is also feeling the pressure after failing to win any of his first five games in charge, managing just one goal in the process.

"People will look at Belgium, Croatia and Serbia, then they'll look at us and Scotland," said Coleman.

"It's a tough, tough group. When somebody like [England boss] Roy Hodgson says it's the group of death, you listen to that.

"We're in that group of death and people look at us as a good team.

"So everybody will be taking points off each other, I think, through the next nine games.

"What we've got to do is - because we've not scored or won for three games - we've got to put that to bed. Once we do that - and we will do it sooner or later - we can march on and look forward.

"They had a real good chance, but Serbia created chances, controlled long periods of the game like you'd expect them to because they're good with the ball."

Wales' fixture in Novi Sad is their first against Serbia, who became an independent football nation in 2006.