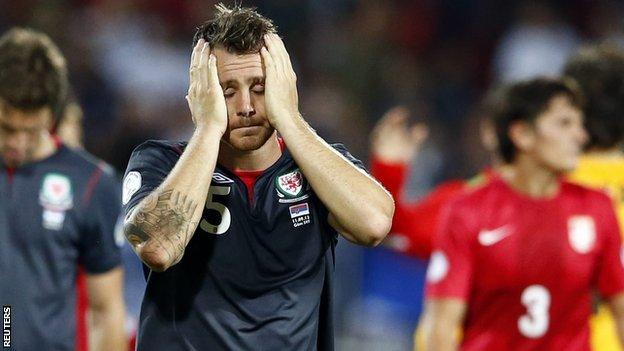 Wales were humiliated in Serbia as they slipped to their heaviest defeat since 1996 and suffered a huge setback in their bid to reach the 2014 World Cup.

Poor defending allowed Aleksandar Kolarov and Zoran Tosic to put the Eagles 2-0 up before Gareth Bale's superb free-kick got Wales back in it.

The thumping defeat by a Serbia side that had scored only three goals in their previous nine games leaves Wales without a point from their opening two qualifiers, following Friday's opening 2-0 home loss to Belgium.

"I'm not quite sure if the system we've got actually suits the players that we've got at the moment.

"Aaron Ramsey to me is a miss at the moment. He's not playing well and it's very difficult to leave your captain out, isn't it, when you've made him captain of your national side?

"He might need to be left out, to get that confidence back and be a better player than he is at the moment - because at the moment we're not getting anything from him."

After that result, manager Chris Coleman admitted that Wales' recent form was "weighing on his mind", while also expressing confidence that his side could reach a first major finals since the 1958 World Cup.

But any confidence that existed will now be in tatters after this thrashing in Vojvodina by Serbia, who were held to a goalless draw by Scotland in their opener.

The Eagles were only three places above Wales in the Fifa world rankings going into the encounter, underlining the perception of a Group A which few observers viewed as a forgone conclusion before qualifying began.

However, while Wales waited on the fitness of midfielder Joe Allen following the illness that ruled him out of the Belgium game, Coleman also had to wrestle with injuries and Craig Bellamy's unavailability.

Coleman may have seen some positives in the opening exchanges but Allen soon gave the hosts a free-kick on the edge of Wales' penalty area and Darcy Blake threatened an own goal as he sliced an attempted clearance.

That boosted the confidence of Sinisa Mihajlovic's Serbia side and when Kolarov lined up a free-kick on the edge of the area, the goal that followed was a belter.

The Manchester City defender scooped the ball over the Welsh wall and into the back of the net for his first international goal.

Having contributed to the hosts' goal with their indiscipline, Wales then failed to deal with Kolarov's run into the penalty area.

Even when confronted by the byline and having stumbled following four failed attempts to halt his progress, Kolarov was able to bring the ball back to Tosic, who tapped it home from close range.

Bale gave Wales hope following a rare first-half incursion at the other end, his free-kick powering into the back of the net from 30 yards with home goalkeeper Vladimir Stojkovic rooted to his line.

But the visitors' frailty at the back was exposed again as the ball reached Djuricic, who put it into the roof of the net.

That left Wales trailing 3-1 at the break and worse was to follow.

Vaughan's first act was to give away a free-kick on the edge of Wales' penalty area, but although they survived on this occasion Bale then lost control and a rapid Serbia attack ended with Ivanovic sliding the ball across to give Tadic a simple finish.

Wales were again culpable for the fifth - Blake being dispossessed for home skipper Ivanovic to finish into the bottom corner.

When substitute Sulejmani rounded off the scoring with a deflected strike that looped in over Myhill, it completed Wales' worst defeat since a 7-1 loss to the Netherlands.