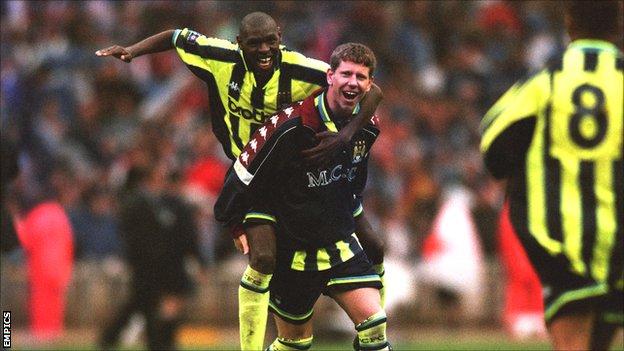 At first glance it is difficult to see how life in football is in any way comparable to life on the front line.

But one man who knows is Lee Crooks.

The 34-year-old is part of Manchester City folklore, having played in one of the most famous games in the club's history - their play-off final victory against Gillingham at Wembley in 1999.

But after a decade in football, Crooks decided on a new career path that has recently seen him return from a tour of duty in Afghanistan, where he served with the RAF as a leading aircraftsman.

"There's good banter with the lads, you're keeping fit and you're working as a team," he told BBC Radio Manchester. "I know this job is probably a little bit more dangerous, but I love it and I wouldn't change anything.

"It's probably a cliche but it's just a job and it's what we're trained to do. It's just like training all week and then playing football on a Saturday. We train and then try to put that training to good use.

"When the day to leave [for Afghanistan] came, it was probably one of the hardest days ever, leaving my family behind.

"Once you get out there, with the whole experience of flying and coming down into Camp Bastion with the lights off the plane, it hits home: 'This is real now'.

"It's like running out at Wembley in front of 80,000 people. It's just a massive adrenaline rush. You're finally there and there's no turning back."

That play-off final is the stuff of legend amongst City fans.

Four days after local rivals United had scored twice in stoppage time to become champions of Europe, City staged an unforgettable comeback of their own.

Their prize - promotion to the English second tier - may not have been as great, but who knows if the club would have made the rapid progression it has, had it not been for Paul Dickov's late leveller and Nicky Weaver's penalty shoot-out heroics.

Crooks, a versatile defender who had come through the youth system at Maine Road, started the match and was substituted late on, as Joe Royle threw on strikers in search of an equaliser.

He made a further 24 appearances the following season, as City made it back-to-back promotions and took their place among English football's elite once again.

Unfortunately, Premier League chances were limited for Wakefield-born Crooks, and after a number of years in the lower divisions, he took plenty of time before deciding to embark on his new career.

It's like running out at Wembley in front of 80,000 people. It's just a massive adrenaline rush. You're finally there and there's no turning back

"I took about 18 months out and then it was just a matter of deciding what I wanted to do," he continued.

"My brother was in the army. He told me not to live with regret. If it's something I wanted to do, I should go and do it. So that was it, and I've never looked back since."

Thirteen years after his own magical day at Wembley, Crooks watched his former club's Premier League triumph - in true City style, it had a thrilling finale - whilst on duty in the Middle East.

He says his time in Afghanistan proved to be a huge learning experience for him, and coming face-to-face with the realities of war has helped him understand the important things in life, however trivial they may seem.

"We live here in nice houses, with nice cars, running water, you can go to the pub for a beer or put a brew on," added Crooks.

"You get out there and all those things are gone. It makes you realise we've got everything here.

"You only hear about the lads that are killed on the television, but there are so many lads that are getting injured out there every day.

"They're making the ultimate sacrifice. It makes you think how lucky you are.

"We write things called 'death letters' and writing that was the hardest thing I've ever had to do in my life. It's tough, but it's something that's got to be done.

"The thing is, out there, you don't know when it's going to be taken away.

You can hear Ian Cheeseman's extended interview with Lee Crooks on BBC Radio Manchester's "In The Spotlight" programme from 18:00 BST on Thursday, 13 September.

It will also be available online for the subsequent seven days.