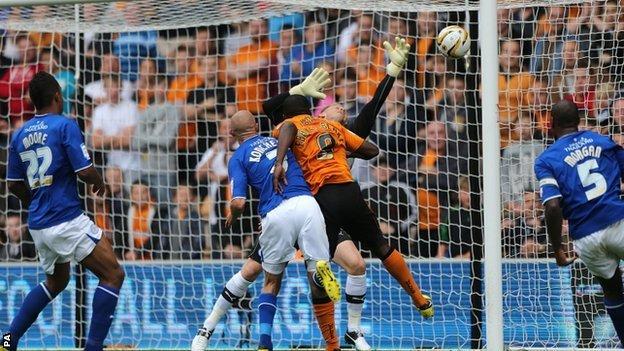 Wolves survived relentless late Leicester City pressure to earn a win that takes them out of the relegation zone and leaves City still searching for their first away point this season.

The hosts led an open game at the break after some sloppy defending allowed Sylvan Ebanks-Blake to head home and Richard Stearman to sweep in a second.

Paul Konchesky smashed in a wonderful 30-yard strike to give the Foxes hope.

Martyn Waghorn hit the post with a late strike but the hosts held on.

Leicester piled forward for large periods of the second half. But thanks to a combination of some wayward finishing and desperate defensive work, Wolves were able to secure just their second league success at Molineux in 2012 and move above their opponents and up to tenth place in the Championship table.

The game was refreshingly open from the outset but, as good as much of the attacking was, some woeful defending also played a significant part in the thrilling fare on offer. Both sides were guilty of giving the ball away cheaply and the chances flowed - particularly before the interval.

Leicester midfielder Andy King, who later limped off with a hamstring injury, went close with a decent strike that was deflected over after an incisive move.

David Nugent fired a fierce shot narrowly over the bar and should have done better when strike partner Jamie Vardy was free in the middle as Wolves appealed for offside.

But Wolves were equally dangerous up front. Kevin Doyle's know-how, experience and clever running off the ball proved a constant menace and a fine platform from which to play, and the excellent Bakary Sako provided a threat out wide.

Doyle had one decent attempt blocked and also produced a sensational curling effort that required a world-class save from Kasper Schmeichel.

Wolves are unbeaten at home this season, but the victory over Leicester is only their second league win at Molineux in this calendar year.

Despite the steady flow of chances, both first-half goals came from no-frills set-pieces and the dreadful defending will have left Foxes manager Nigel Pearson traumatised.

Ebanks-Blake crashed the first goal past Schmeichel from six yards from a simple, but perfectly delivered Sako free-kick.

And Stearman doubled the lead when Ritchie De Laet was caught ball-watching from a corner and the big defender met Doyle's flick-on to send a beautifully controlled volley in off the underside of the bar.

The defending improved after the break but the opportunities continued, Wolves going close through Ebanks-Blake and Sako.

But the visitors - boosted by the second-half introduction of Anthony Knockaert for the ineffective Lloyd Dyer - gradually got on top and started to dominate possession and chances.

Wolves had Karl Henry back in central midfield but he and his team-mates struggled to deal with the quality and movement of the young Leicester quartet.

A curling Marshall cross nearly beat Ikeme, who knew little about the save he made with his feet, and the pressure began to build.

Konchesky then crashed in the most spectacular of efforts, finding the roof of the net from 30 yards with a shot that beat Ikeme for pure pace.

A second City goal seemed inevitable. But Nugent's header drifted narrowly wide from a floated De Laet cross and Waghorn wasted their best chance when his low strike came back off the inside of the post, ensuring a third away league defeat this season.

"You could see that it was a team that is not used to winning. All the good organisation and spells that we had in the first half we lost in the second half. But they fought well, they blocked shots and were brave in our area and we are relieved we got three points.

"The first half was something to build on. In a way it was the first game for the new Wolves with the new players coming in from the beginning and during the game.

"The good thing was that the team did not panic. In the last 15 minutes although it was not wonderful to watch for a coach, it was good defending of the penalty area.

"The only way to get confidence is to win games but we still need to be braver and make sure we are not afraid of playing."

"I am annoyed in the fashion that we conceded goals from two set-plays. It was sloppy and when we had the ball we didn't work hard enough. It really is a case of us making similar mistakes and at some point we have to start taking our chances.

"But the players are working hard and I believe our fortunes will change. We have got to start getting the performances to a point where we are more difficult to beat because we have the armoury to hurt sides.

"We played some good football but you don't want to play good losing football. We have the nucleus of a very good side. We have to take responsibility for how we perform and then everything else will fall into place."