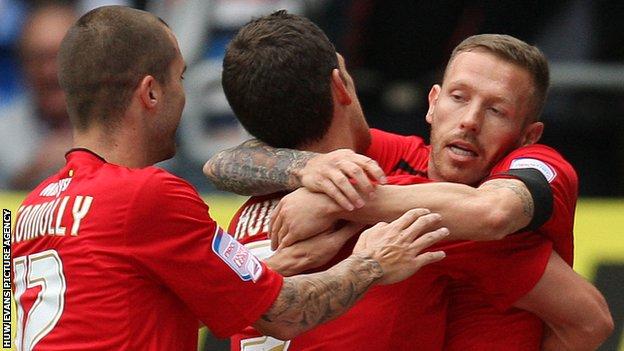 Craig Bellamy scored a spectacular free-kick on his return from injury to set Cardiff City on their way to a third successive home victory.

Bellamy found the far top corner with a 20-yard drive three minutes after coming on as a second-half substitute.

Visiting goalkeeper Paddy Kenny saved low from Smith to ensure the home side were denied the comfortable end their second-half dominance had deserved.

After 45 minutes of what can generously be described as committed football by both sides, Heidar Helguson wasted the only scoring opportunity of the first half in stoppage time.

The forward was unmarked seven yards out but failed to keep his header under the crossbar from Whittingham's corner.

But Cardiff looked like a side transformed after the break.

Having been thwarted through the middle by Leeds' combative spoiler Austin, the home side began to find success down the flanks.

First Maynard forced an instinctive save from Kelly, before the goalkeeper was at full stretch to save Mark Hudson's far post header.

Craig Noone had played his part in Cardiff's period of ascendancy, but the winger was removed to allow for Bellamy's introduction.

The former Liverpool striker, recovered from a torn calf, had recently felt the need to release a statement denying rumours he was considering retiring from the game.

A huge ovation greeted Bellamy as he came off the bench on 64 minutes, and the home fans were soon on their feet again when his free-kick broke the deadlock.

Kenny had no chance as Bellamy's rasping drive from the left edge of the area flew in to give the 33-year-old his first goal of the season.

The ever-dependable Whittingham then put Cardiff firmly in control when he sent Kenny the wrong way from spot after a clumsy Lees challenge brought down Maynard in the area.

Leeds had offered nothing after the break, but they sensed an unlikely draw when Austin's 30-yard free-kick beat David Marshall.

The Cardiff goalkeeper berated his wall, but Austin's low drive was only a yard from the middle of the goal as it went in.

Kenny kept Leeds in sight of a point with two more fine saves, denying Maynard from six yards and then dropping to the ground quickly as Smith fired from 18 yards through a crowded area.

But Cardiff were lucky to escape four minutes from time when a Lee Peltier header sailed a yard over the bar with Marshall beaten.

"We spoke at half-time, upped the tempo and attacked them in different areas in the second half.

"We had 19 chances at goal and Paddy Kenny made three or four magnificent saves. On another day we could have scored four or five.

"After half-time we looked a different team. It's early days in the division, but I'm delighted with the win."

"I thought we deserved a point. But to lose Ross McCormack after three minutes was hard, he's our only Bellamy.

"Ross has twisted his ankle quite severely. I don't think there is any break, but we can't tell yet because of the swelling. I'd imagine he'll be out for a few weeks.

"It was a fantastic goal by Bellamy, but we were very disappointed with the free-kick that was given."