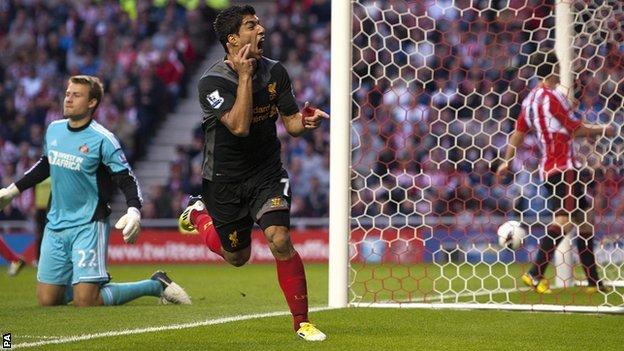 An emotional week for Liverpool following the Hillsborough revelations ended in a draw at Sunderland.

The equaliser eventually came when Luis Suarez sidefooted in after his initial effort came back off Titus Bramble.

Jonjo Shelvey had a late chance for the visitors as they finished the match the stronger but his shot was saved by keeper Simon Mignolet.

The build-up to the match had been dominated by the Hillsborough findings and there was a show of solidarity between the two clubs at the ground, Sunderland flying flags at the Stadium of Light at half-mast as a mark of respect.

Once the match got under way, the Black Cats initially highlighted a lack of creativity and cutting edge from the Reds.

The home side allowed their guests plenty of possession and tried to catch them out on the break as they put up a disciplined defensive barrier.

The strategy almost had to be abandoned early on when defender Carlos Cuellar's tame header back to Mignolet let in Borini, whose shot was blocked by the Black Cats keeper.

Borini had another opening when Suarez touched the ball into his path only for the Italian's first-time shot to be parried away by the alert Mignolet.

But, in the main, Sunderland kept Liverpool comfortably at arm's length and they reaped the rewards when they took the lead with their first real attack.

"The two Irish managers share the spoils. Luis Suarez got the goal as Liverpool came from behind to get the equaliser to Steve Fletcher's goal for Sunderland. But Brendan Rodgers still has to wait for his first league win as Liverpool manager. It's also more than 100 years since Liverpool failed to win one of their first four league games of a season."

Gardner weaved past Suarez and Johnson before sliding a low cross for Fletcher to slot in on his home Premier League debut.

To add to Liverpool's growing frustrations, Suarez was booked for diving when he went over John O'Shea's leg.

The Reds regrouped after the break and Johnson, playing at left-back, cut inside before curling in a shot that came back off the crossbar.

Sunderland survived another scare when Raheem Sterling's cross caused confusion in their area, ending with Gerrard's guided shot hitting the outside of the post.

Teenager Sterling was Liverpool's main threat and it was another of his crosses from the right that led to the equaliser.

Suarez failed to connect properly with his first attempt and, after the ball ricocheted back to him off Bramble, he steered in a shot with his left foot.

Shelvey's failure to take his late chance left both camps with a point and still without a Premier League win so far this season.

"I thought we played well in the first half, we gave as good as we got, got the goal in front.

"The irony of it is that we were probably in the second half having our best spell in possession of the ball and looked as if we had got a second wind when they got the equalising goal.

"But they had a number of chances and didn't take them, hit the bar and so from that viewpoint, probably a point was a fair result."

"The players have been terrific. It's been a difficult week, of course, as you can imagine for the city and everything surrounding it.

"The performance was outstanding, both our creativity and our movement, and there was a really good tempo and rhythm to our game.

"We went behind and we were disappointed with the goal, it was a soft goal from our perspective and it went in against the run of play.

"But in the second half, we showed a real reaction and continued what we were doing in the first half, but really upped the tempo and the penetration in our game and by the end of it, I am sure Sunderland were probably happier with the point than ourselves."