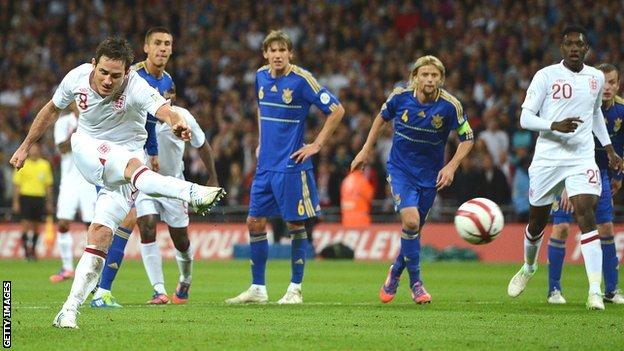 Frank Lampard's late penalty rescued a point for England in the World Cup qualifier against Ukraine at Wembley.

Yevgeni Konoplianka's spectacular first-half strike gave a highly accomplished Ukraine side an advantage they protected until three minutes from time, when a prolonged spell of England pressure was finally rewarded.

"For England to get a point is a real bonus. When you don't play very well and pinch a point you begin to think it could just turn out to be a very good result. They had some outstanding players missing but I am not sure even with Terry, Rooney, Walcott and whoever else playing that would have made any difference. We saw from the way Ukraine celebrated that they think this is a big result but they could have had so much more."

Substitute Danny Welbeck - who made an impressive impact after coming on - saw his effort blocked in the area by Yevgeni Khacheridi and Lampard scored with trademark composure from the spot.

England then suffered the blow of seeing captain Steven Gerrard sent off for a second yellow card, ensuring he will miss the qualifier against San Marino at Wembley in October.

The relief in the reaction of England manager Roy Hodgson was obvious as he accepted a point was the best his injury-and-illness hit team were going to get from a tough night's work that was a far cry from the ease of the 5-0 win against Moldova in Chisinau on Friday.

Ukraine dominated possession for long spells in the first half, although Manchester United's Tom Cleverley wasted two clear chances to score and challenge the supremacy of Oleg Blokhin's side.

On this evidence Ukraine, beaten narrowly by England in Donetsk in Euro 2012, will be formidable opponents in this group but Hodgson and his players will ultimately be grateful to claim a draw from a game that looked to be slipping away from them until the closing stages.

Ukraine's robust approach was emphasised in the opening moments when a thunderous collision between Gerrard and Roman Zozulya left England's captain limping heavily.

The visitors were in no mood to take a backward step and they almost went ahead when Oleg Gusev's deflected cross looped beyond the reach of England keeper Joe Hart but glanced to safety off an upright.

England were struggling to exert any sort of influence in midfield but they thought they had made a breakthrough after 11 minutes when Defoe turned on the edge of the area and sent a crisp 20-yard strike past keeper Andrii Pyatov. There was only frustration to follow for the Tottenham striker, however, when Turkish referee Cuneyt Cakir ruled he had delivered an illegal hand-off to Andriy Yarmolenko before letting fly.

As Ukraine continued to threaten, it required a goal-line clearance from the well-positioned Gerrard, covering for Hart, to block Ruslan Rotan's shot.

Despite struggling to cope with the superior technique of Ukraine, England had openings as the half progressed - the best of which fell to Cleverley.

He was guilty of wasting a perfect opportunity after Defoe knocked Gerrard's cross into his path, shooting straight at Pyatov from point-blank range.

It was to prove an expensive miss as Ukraine took the lead six minutes before the interval. Joleon Lescott conceded possession cheaply but there was no arguing with a magnificent finish from Konoplianka, bending a superb effort high past Hart from 25 yards despite Gerrard's challenge.

England needed a swift reply and once more the opportunities fell to Manchester United's Cleverley. He was unable to take them, first miscuing a shot badly wide from a good position inside the box, before then striking the outside of the post from an angle.

It was to be his last significant contribution as he was replaced by Old Trafford team-mate Welbeck just after the hour. Daniel Sturridge was then introduced for the subdued Alex Oxlade-Chamberlain seconds after Glen Johnson was just off target.

Welbeck came closest to giving England a route back into the game when he controlled the ball eight yards out but could only strike the woodwork, leaving Hodgson holding his head in sheer frustration on the touchline.

The Manchester United striker had lifted England's performance and he was the central figure again as their pressure finally bore fruit with that late equaliser. Yevgen Khacherdi handled as Welbeck once again threatened, leaving Lampard to score his 26th international goal - which equals Bryan Robson's tally - with his usual expertise.

There was still time for a setback for England as captain Gerrard, who had been shown a yellow card earlier for catching Rotan with an elbow, was sent off after a clumsy challenge on Denys Garmash.