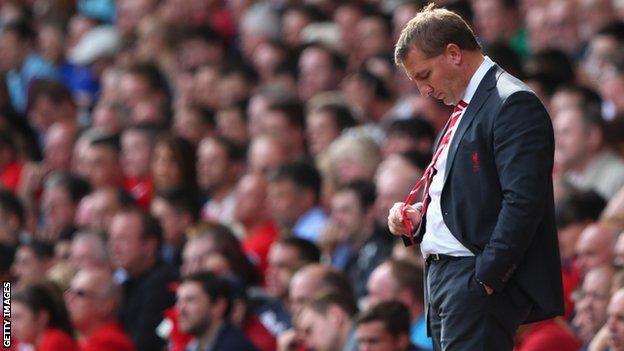 Liverpool are in unfamiliar territory.

A calamitous final 24 hours of the transfer window has left Brendan Rodgers contemplating the recruitment on an ageing free transfer to bolster a wafer-thin forward line that features Luis Suárez and Fabio Borini as the only recognised senior strikers.

Andy Carroll left Anfield to join West Ham on loan, despite the lack of a replacement, leaving Rodgers woefully short of options.

Liverpool's failure to sign Clint Dempsey on deadline day, prompted principal owner John W. Henry to write an open letter to the club's fans in an attempt to respond to hostile criticism coming from all quarters and defend his transfer policy.

Whatever the reasons Liverpool have been reduced to scouring the free agent market for players others might have missed. The reality is that with very few realistic options available, Rodgers is more likely to promote from within.

Eidur Gudjohnsen and Florent Sinama-Pongolle are among those available on a free transfer, though precocious and hungry youngsters, such as Samed Yesil and Adam Morgan, are more likely to be given a chance to prove their worth, at least until January when the club will think again.

Samed Yesil The German striker was signed for £1m last week and there are some at Anfield who believe he can make an immediate impact. The 18-year-old, who has represented his country at under-16, 17 and 18 level, scored 23 goals in 20 games for Bayer Leverkusen's Under-19 side last season and has the found the net 19 times in 20 appearances for his country, including six goals for Germany at the Under-17 World Cup last year. May struggle to adapt to the physical demands of senior football but his appetite and attitude cannot be questioned. "I get stuck in where it hurts because I want to score goals. It doesn't matter if I get kicked or fouled. The important thing is I score," Yesil said recently.

Michael Ngoo Having let Andy Carroll go, perhaps it is unlikely that Rodgers will turn to an equally physical striker but Ngoo would appear to have all the raw materials. Having finished as the top scorer in the reserves last season, the 6ft 4in 19-year-old scored a hat-trick against Bray Wanderers in pre-season and showed enough to suggest he is far more than just a big man. Consistency has been Ngoo's problem since joining from Southend, but the rangy England Under-20 striker is improving quickly.

Dani Pacheco The Spaniard was just hours from joining Real Valladolid on loan last Friday but has remained at Anfield and is desperate for a chance. Did little to convince Rodgers in pre-season and has still to fulfil the vast promise he had as a 15-year-old when he graduated from Barcelona's famed La Masia school. He has, however, been an ever-present in Spain's all conquering youth teams, featuring for the under-21s last season. An outside bet at best.

Adam Morgan The 18-year-old is perhaps the youngster furthest up the pecking order at Anfield, having impressed Rodgers with his willingness to learn and tireless work-rate during pre-season. Was given his first competitive start against Hearts at Anfield last week and will be given more chances to impress. The local boy has been at Anfield since the age of 10, when he scored 80 goals in one season for the Liverpool Under-10s and went on to score in 13 successive matches for Liverpool's Reserves and Academy sides in 2010/11, scoring 21 goals in the season. "Every time I've watched him, whether it's live or on TV, he's always in and around the area where it matters, and that's the 18-yard box to score goals. As a striker, that's a great trait to have, and he looks great if he's got it," former Liverpool defender Gary Gillespie said.

Robbie Fowler is the longest of long shots in a field of outsiders but the former Liverpool striker, 37, remains desperate to continue his playing career. Has an established relationship with Rodgers, having gone on tour with Liverpool to North America and would jump at the chance. But even the romantics will struggle to see this dream becoming a reality.

Alessandro Del Piero The Italian, who is expected to clarify his future at a press conference in Turin on Wednesday, is perhaps the most celebrated freebie of the lot. Now aged 37, the former Juventus forward is expected to join Sydney FC in a deal worth £1.3m per season. Could offer Liverpool something different and has never been a player reliant on his pace.

Florent Sinama-Pongolle Brought to Anfield as one of the world's most talented young teenagers, Sinama-Pongolle failed to live up to that billing during an inconsistent spell at Anfield. Now 27, the Frenchman has been released by Sporting Lisbon and is a free agent, having spent time with Recreativo and Atlético Madrid since leaving Anfield in 2006. Would fit into Rodgers's 4-3-3 system but questions remain over his fitness record.

Didier Drogba The former Chelsea striker joined Shanghai Shenhua in the summer but with problems apparently developing at the Chinese club, there remains the chance he could yet be on the lookout for a new club. The 34-year-old is currently on international duty with Ivory Coast but he would need to have his contract cancelled before becoming available on a free transfer.

Eidur Gudjohnsen The former Chelsea and Barcelona forward could fit into Rodgers's plans but having struggled on his return to the Premier League with Stoke City, it is hard to see him figuring at Anfield. Turns 34 this month and is available immediately.