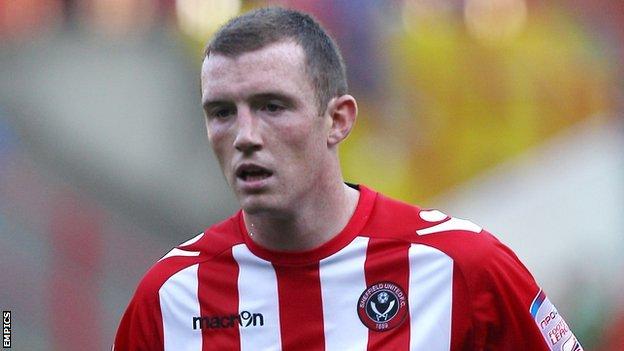 Sheffield United had two players sent off but were still able to snatch a point at struggling Scunthorpe.

Skipper Michael Doyle was dismissed for his challenge on Mike Grella and midfielder Ryan Flynn also saw red for a high tackle on Christian Ribeiro.

A header from debutant Leon Clarke looked to be enough for Scunthorpe to claim their first win of the season.

But the Blades levelled when Neill Collins, who had earlier hit a post, nodded in Tony McMahon's free-kick.

"I thought we were pretty good for the whole game, irrelevant of what we had on the pitch.

"The attitude was really good, and the new signings [Leon Clarke and Karl Hawley] made a difference.

"I am frustrated but there's plenty of positives to take. We haven't lost, that's the most important thing.

"After four losses on the trot, you don't want five. We've got a point on the board and we've got a squad now that's capable of competing."

"When you get a performance like that from an official, I can't understand why I'm not supposed to comment on that.

"It was a terrible game from his [the referee's] perspective. He sent Michael Doyle off for an alleged stamp and he's nowhere near the boy. Even before that, he gave some strange decisions for both teams.

"If anything, [Ryan Flynn's red card] is a booking. They've both gone for the ball.

"There's two coming together at pace. There's a ball there to be won and they're going hell for leather for it."