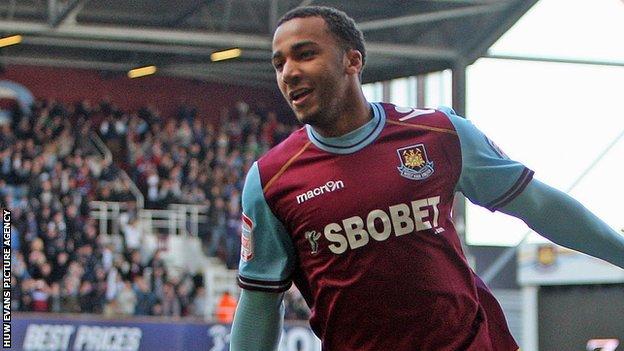 Cardiff City have signed Nicky Maynard from West Ham United for an undisclosed fee, thought to be close to £2.5m.

The 25-year-old striker passed a medical and agreed personal terms at Cardiff City Stadium to seal a three-year contract.

Maynard joined the Hammers for £2m from Bristol City in January 2012 but his first-team chances have been limited.

The Crewe product is Cardiff's 10th summer signing after Brighton wing Craig Noone joined on Thursday.

Maynard started his career as a trainee at Crewe Alexandra, scoring 32 goals in 59 league appearances, before joining Bristol City in a £2.25m deal in July 2008.

The striker was equally prolific during his time at Ashton Gate, hitting 45 goals from the 124 league games, but the Robins were forced to sell Maynard before his contract ran down.

He scored in West Ham's 2-0 League Cup win over former club Crewe on Tuesday night, making his first appearance of the season, but now seems to be headed for Cardiff to help boost the Bluebirds' Championship campaign.