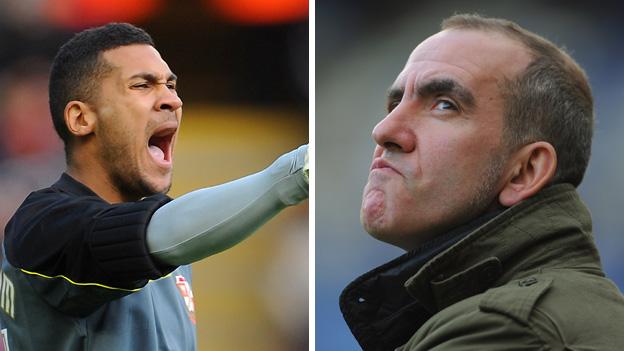 Swindon manager Paolo Di Canio says he will not play goalkeeper Wes Foderingham again until he apologises to fans for the "arrogance" he showed in the 4-1 loss at Preston.

The 21-year-old was substituted on 21 minutes after his error led to Akpo Sodje's opener.

Di Canio went raw on his young goalkeeper. Hope the young lad is strong enough to come through this...harsh start to League One football

He exchanged words with Di Canio as he left the field and chose to sit in the stands for the remainder of the game.

"It wasn't only the mistake, which can happen to everyone. It was the arrogance later on when he started moaning to the others. That was the worst thing for me.

"If he doesn't come out and say sorry to the fans for his professionalism, then he is out of my team."

Foderingham had never played in the Football League before Di Canio brought him to the County Ground on loan from Crystal Palace in October 2011.

He immediately claimed the number one jersey and earned a permanent deal in January after conceding only six goals in 15 games.

The England Under-21 player felt the wrath of Di Canio towards the end of last season's League Two-winning campaign, when he was dropped from the first team for his involvement in a post-match night out. The Italian reinstated the keeper after a group apology.

After Di Canio replaced him with Leigh Bedwell on Sunday, Foderingham argued with his manager before kicking a water bottle.

And the Swindon boss is adamant that he will not back down until the player expresses his regret.

"I don't want any arguments from the fans who will say 'we've got to play Oxford'," Di Canio said. "I don't mind because these are my rules.

Who is Wes Foderingham?

"The fans have to stay calm and not boo. I have made my decision.

"He was nothing until the day he joined me. He didn't have one second as a professional.

"He is very good and it is thanks to him we did well last year, but he's forgotten everything. He's arrogant and thinks he's untouchable."

Di Canio concluded: "I don't have to speak to anybody. The players have to come to the manager when they behave like this. I didn't leave the ground, kick the bottle or leave my team-mates."

This latest run-in comes just weeks after Di Canio's spat with Paul Caddis, during which the Italian refused to play the defender because of a "change in attitude". The former captain has now left on loan to Birmingham City.

Di Canio also had a bust-up with striker Leon Clarke only a month into his tenure that resulted in the player being exiled from the club.