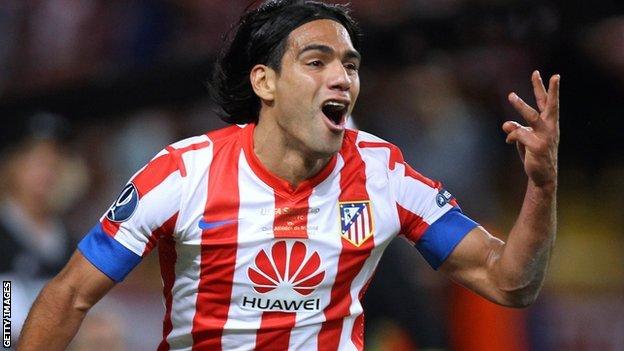 Chelsea were comprehensively beaten in the Super Cup as Radamel Falcao scored a hat-trick to inspire Atletico Madrid to victory in Monaco.

Falcao struck a shot against the crossbar before beautifully dinking in his first past keeper Petr Cech.

He curled in a shot with Chelsea in disarray and ended a counter attack with a left-foot finish for his third.

Miranda slotted in a ruthless Atletico's fourth, while Gary Cahill lashed in a shot for the Blues.

In a match pitting European champions Chelsea against the Europa League winners, it was the latter who deservedly came out on top with Falcao in irresistible form.

The Colombian, who scored 24 La Liga goals and 12 in Europe last season, came into the game on the back of a hat-trick and quickly took advantage of a lethargic Chelsea defence.

"Well that was a lesson, absolute joke no fight, desire, passion, and a big reality check."

Having seen an early shot come back off the crossbar, he expertly lifted the ball over the on-rushing Cech when played through on goal.

A stunned Chelsea were being overrun and another incisive move ended with Falcao curling a left-foot shot into the top corner from just inside the box.

Roberto Di Matteo's side were exposed time and again, the scale of their defeat coming as a surprise given they had gone into the game leading the Premier League after three straight wins.

But Atletico had an intensity and urgency missing from Chelsea's play, and Falcao was again denied by the woodwork when he headed against the post.

However, he did not have long to wait to complete his hat-trick as Atletico countered, Chelsea backtracked and Falcao latched on to an Arda Turan pass before slotting past Cech.

Chelsea's lacklustre play was epitomised by their lazy response to a free-kick as Mario Suarez diverted the set-piece to Miranda, who steered home a shot.

Cahill scored a late goal for Chelsea but it did nothing to disguise the dominance of Atletico.

"We had a very slow start and we conceded two goals within 20 minutes.

"We conceded too much space. It's something that's been a little bit of our game, to be hard to beat but tonight, that certainly wasn't the case.

"We never really got into the game, so that's the most disappointing aspect.

"We conceded a bit too much space to Atletico Madrid, especially a player like Falcao. You cannot give him space."

"What Radamel is doing is indescribable.

"He's a lad that, whenever you set the bar high, he responds by going even higher.

"I've known him since he was young and he's always demanding. He thrives on pressure, he thrives on demands.

"Hopefully, we'll be able to enjoy him at Atletico for a long time."