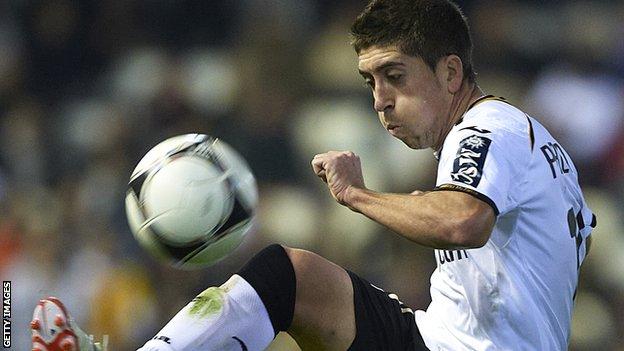 Hernandez, who has agreed a three-year deal, fills the gap left by Scott Sinclair's move to Manchester City.

The 27-year-old played under Swans manager Michael Laudrup at Getafe in 2007-08 and had stated his desire to work with the Dane again.

The fans are good and, together with Michael Laudrup's presence, it's an exciting package

Hernandez had made more than 100 appearances for La Liga side Valencia, scoring 16 goals.

A product of the Valencia youth system, he made his debut for Spain in June 2009 and celebrated his first and so far only international goal four months later in a 5-1 friendly win over Austria.

Hernandez said he was determined to join Swansea as soon as they made their interest known, despite offers from other clubs.

"I want to thank the club and Michael Laudrup for making me feel like a very important player," he said. "Now I want to repay that faith."

Swansea are in their second season in the Premier League and have won their first two games of the new campaign to lie second in the table.

"Swansea is a very important football club and will only keep getting better," said Hernandez.

"They were a good side last year and look even better so far this season. The fans are good and, together with Michael Laudrup's presence, it's an exciting package."

Hernandez explained that the chance to work with Laudrup once again was too good to pass up.

"Michael was my idol when I was young,'' he added. "I learned a lot from him. Now I want to help him at Swansea in return.''

Hernandez will not figure in Saturday's game against Sunderland at the Liberty Stadium, where Swansea will seek to maintain their 100% start.