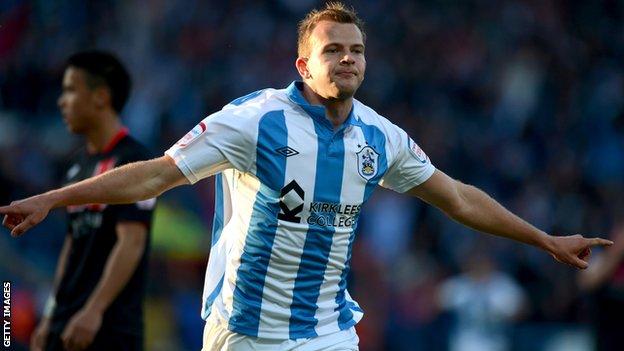 Blackburn Rovers have broken their transfer record to sign Huddersfield Town and Scotland striker Jordan Rhodes in a deal worth up to £8m.

Rhodes, 22, has signed a five-year contract and will lead Rovers' attempt to return to the Premier League.

Manager Steve Kean said: "Jordan is a top class striker and we are absolutely delighted to bring him in."

The former Ipswich Town player had a medical at Blackburn on Thursday. The fee will be paid across the length of the contract, with add-ons dependent on factors such as promotion.

The deal eclipses the Terriers' previous record sale - back in 2000 they received £2.75m from Ipswich for striker Marcus Stewart.

Blackburn owners Venky's have been criticised for their running of the club since taking over in November 2010, but Rhodes is the Championship side's ninth signing since they were relegated from the top flight in May.

Managing director Derek Shaw said: "From the very first day I walked in here, the owners have given superb backing for everything we are trying to do on and off the field. That is where the credit is really due."

Blackburn had seen a series of bids for the 22-year-old rejected before the breakthrough came on Wednesday.

Do I think this is the right move for him? I'm not quite sure, but we thank him for everything that he's done for us

Kean had been chasing Rhodes, who scored 40 goals for Huddersfield last season in all competitions, for three weeks following a long-term injury to another recent signing, Leon Best.

Rhodes, who was the leading English goalscorer in the top four divisions in 2011-12, is set to go straight into the Rovers squad for Saturday's trip to Leeds.

"Every player in the world has a valuation and if another club reaches that then there's not a lot you can do about it.

"Do I think this is the right move for him? I'm not quite sure, but we thank him for everything that he's done for us."

Rhodes has scored three goals in three games for club and country this season, including his first international strike in Scotland's 3-1 friendly win against Australia.

Third-placed Blackburn are undefeated in their opening three Championship matches.