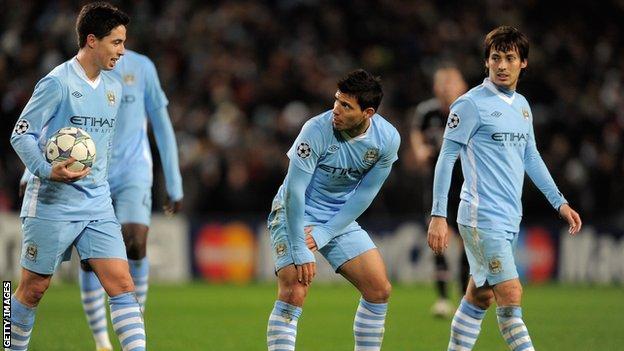 Champions League holders Chelsea begin their defence against Serie A champions Juventus, while Celtic have been drawn with Barcelona in Group G.

Chelsea, who beat Bayern Munich on penalties in the final last season, also come up against Ukrainian side Shakhtar Donetsk and Denmark's FC Nordsjaelland, who they face at Stamford Bridge in their last game.

As well as Barcelona, Celtic face trips to Benfica and Spartak Moscow but all eyes will be on their two games against the 2011 Champions League winners.

Sir Alex Ferguson's men open their campaign at home to Turkish giants Galatasaray, before rounding off the group stages at Old Trafford against Romanian side CFR Cluj.

All of the teams lining up against Manchester City, who play Borussia Dortmund in their final game, are national champions of their respective leagues. City's task was made harder because their Uefa co-efficient - determined by their recent record in European competition - is not as high as their English rivals.

"Looks like we're not going to get any easy games again this year but it is certainly a good group for the fans. I'm looking forward already!"

"What a group Real Madrid, Ajax and Dortmund so excited to play those big games."

"Very motivated to play the Champions. And even more in @MCFC's group. Big rivals for a great competition."

Arsene Wenger's side travel to France in their first game, and finish with a trip to Greece to face Olympiakos.

Former Real Madrid forward Emilio Butragueno said that although his team and City might be viewed as favourites to qualify for the knockout stages, every game would be challenging.

"From a spectator point of view this group is very attractive and we will watch great matches and players with great prestige," he said. "But it will be tough and it will be like a final each time so we have to be prepared."

Celtic manager Neil Lennon said the draw with Barcelona would be a test for his team, but would add a touch of "real glamour" to their European campaign.

"We are familiar with the three teams, and have recent history with all three under [former manager] Gordon Strachan," Lennon said. "It's a tough, tough group but all the teams play good football, so they will be attractive games to watch."

The group stages run from 18 and 19 September through to 4 and 5 December.

Full list of fixtures of every group game by date can be found here.