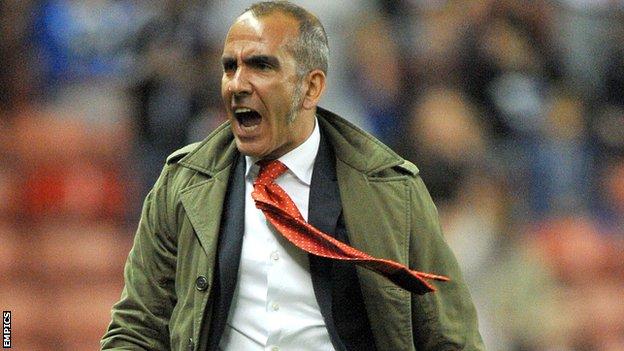 Swindon Town manager Paolo Di Canio has described their League Cup second round win over Stoke as one of the best results in the club's history.

The Robins squandered a 2-0 half-time lead but won 4-3 in extra-time.

"As a perfectionist, I did not enjoy conceding three goals," Di Canio told BBC Wiltshire.

"But we have to put this game as one of the best in the club's history. In the first half, it looked like Stoke City against Barcelona."

He continued: "I don't want to exaggerate but I have to say this. It was a shame we went in at half-time with only two goals. It should have finished 5-6.

"To win like we did, you have to have fantastic quality and spirit. Those lads deserve this result. It was a good and fair result for them after what they did in the game."

Di Canio against the big guns

Swindon secured the League Two title last season, in Di Canio's first year in charge, and have continued their brilliant form this term.

They demolished Championship side Brighton 3-0 in the first round of the Capital One Cup and so far remain unbeaten in League One.

James Collins, one of seven signings made by Di Canio this summer, netted the winner against the Potters to complete his hat-trick.

And although the Italian was delighted with Collins's efforts, he reserved praise for his strike partner, Andy Williams.

"From the fans' point of view, the hat-trick was the best, but Andy did an amazing job, too," said Di Canio.

"He missed a goal at the end because he was tired but the way he extended my team and the way he pulled his opponents with his run, it was something special."

Swindon will find out their third-round opponents on Thursday night.