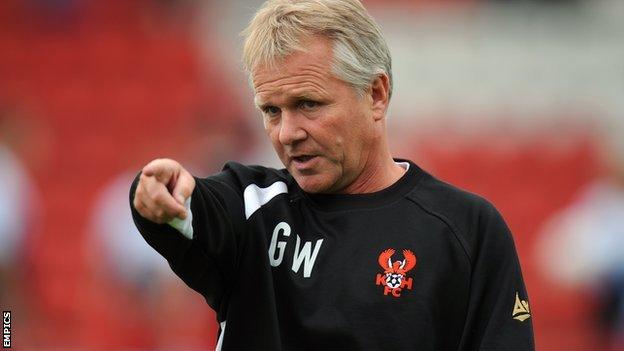 Kidderminster Harriers assistant manager Gary Whild admits he is "desperate" for a win after his side lost a fifth straight game on Monday.

Harriers sit bottom of the Blue Square Bet Premier without a point after the 1-0 defeat by Forest Green.

I think it's one of them where you get one result, then another and thinks look differently.

"We're disappointed with the start," Whild told BBC Hereford & Worcester. "We expected to do better but we are confident we can turn things around.

"I think the obvious thing to say is we're desperate for that first win."

Whild continued: "We've got to manage that and make decisions to change things around.

"We're not hiding away from the disappointment. I'm sure every supporter's disappointed and the players in the dressing room, but we've just got to keep working."

Following their 1-0 defeat on Monday, the Harriers find themselves already four points off safety.

But Whild says his team are focused on changing their fortunes in their next match against Braintree.

"We've got to make sure we give ourselves a maximum chance of getting a result," he said.

"I think it's one of them where you get one result, then another and thinks look differently."