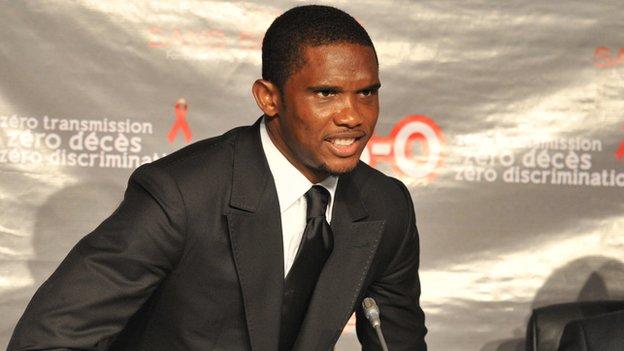 Samuel Eto'o has refused to play for Cameroon as a protest against what he describes as the "amateurish and poorly organised" national team set-up.

The striker was in the squad to face Cape Verde in an Africa Cup of Nations qualifier in September after completing an eight-month international ban.

But Eto'o said in a letter to the Cameroon Football Federation that he had put his return "on hold".

"The shortcomings I raised as team captain are unresolved," he said.

Eto'o, who has won 109 caps and scored 54 goals for Cameroon, was suspended for his part in a player strike over unpaid bonuses following a tournament in Morocco last year.

The Cameroon Football Federation notified Eto'o, his lawyer and his Russian club Anhzi Makhachkala that his ban has expired earlier in the week.

And coach Denis Lavagne picked Eto'o in a 23-man squad to face Cape Verde on 8 September for the first leg in the final round of qualifying for the 2013 Cup of Nations.

But the former Cameroon skipper remains unhappy about issues such as poor management of the national team and long flights in second class and has made himself unavailable for selection.

"Our national team continues to dwell in an environment characterised by amateurism and poor organisation not compatible with professional sports," wrote Eto'o in his letter to the CFF which he published on his website.

"I doubt if supporters of the Indomitable Lions will understand my move aimed at attracting attention to the imperative necessity to make the team professional.

"The team is a veritable institution that has contributed much to the nation and from which much is still expected."

Lavagne had already expressed his intention to removed Eto'o as captain on his return from suspension. Eto'o's decision not to play has now laid that issue to rest.