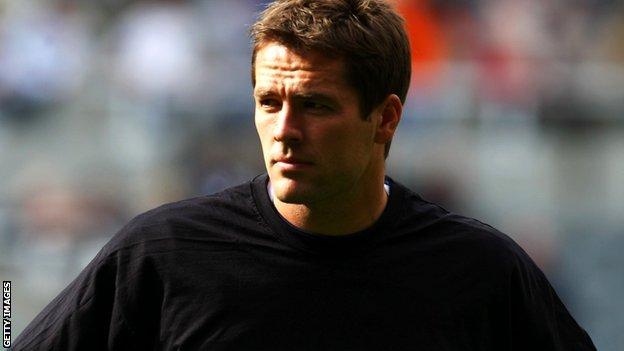 Former Manchester United and England striker Michael Owen says he expects to sign for a new club before the transfer window closes on Friday.

Owen, 32, left Old Trafford in May and is a free agent.

Stoke City have expressed an interest in the frontman, while Everton and a clutch of other sides are reported to be keen.

Owen told BBC Sport: "I've been in contact with quite a few teams and I expect to be donning a new shirt soon."

"As with a lot of situations in the transfer window a lot of things happen late.

"It's about picking the best club with the best manager and suiting me and my family."

The former Liverpool, Real Madrid and Newcastle striker has 89 caps and 40 goals for his country, though he has not played internationally since 2008.

He spent three seasons at Manchester United but played in only 52 games, netting 17 times.

Owen admitted that during his time working under Sir Alex Ferguson he found opportunities to play limited.

"[Last season] there were five [strikers] and the longer I was there I was getting further away from the first team. It was just an inevitable thing that I wasn't going to be required anymore, but this is football - it's a tough game out there."

However, Owen denied suggestions that his time playing in the top flight may have passed, and retirement from the sport is a possibility.

"The quality of the team and the manager is important and I'd prefer it to be in the Premier League," he told Sportsweek on BBC Radio 5 live.

"I want to play on for another two years at least - I'm only 32. Look at Ryan Giggs and Paul Scholes, they inspire you to play on. At 32 I certainly don't feel like it's time to retire."