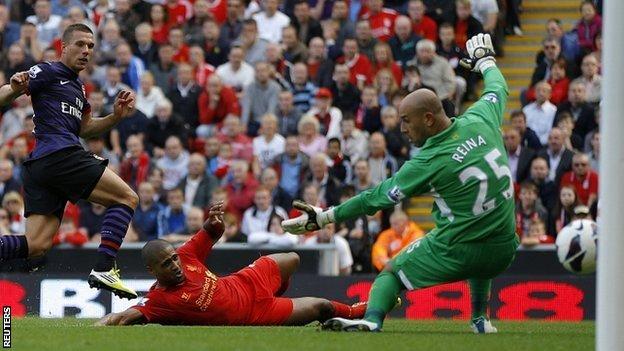 Arsenal secured their first victory of the season in impressive style at Anfield as they won comfortably against a desperately poor Liverpool.

Arsene Wenger's summer signings Lukas Podolski and Santi Cazorla scored their first goals for the club either side of the interval to leave new manager Brendan Rodgers presiding over Liverpool's worst start since 1962-63.

Arsenal had the game's outstanding performers in Cazorla and Abou Diaby and a third successive clean sheet will also have delighted Wenger and his new right-hand man Steve Bould.

The difficulties are mounting swiftly for Rodgers. He has to deal with a shortage of attacking resources after Liverpool failed to replace Andy Carroll following his loan move to West Ham United.

And to make matters worse, the decline of goalkeeper Pepe Reina continues as he was again badly at fault for Cazorla's second goal that settled the destiny of the points.

That followed his mistake that allowed David Templeton's shot to go through him against Hearts in the Europa League on Thursday.

These are crucial early days for Rodgers and their next league test is a difficult trip to Sunderland.

Raheem Sterling, just 17, offered moments of hope for Liverpool but they were few and far between as more experienced and illustrious team-mates failed to exert any influence over affairs.

Arsenal were dominant in all areas, with Diaby ruling midfield and Cazorla proving what a bargain he is after a £15m move from Malaga.

For two managers who pride themselves on the passing game, Rodgers and Wenger will have been aghast at the number of careless passes and errors that littered an undistinguished first period.

And it was from one such moment of careless, with Liverpool captain Steven Gerrard the culprit, that Arsenal took the lead after 31 minutes.

Gerrard conceded possession as he tried to find Luis Suarez, allowing Cazorla to surge forward and play in Podolski for a clinical finish that the German striker took with great expertise.

Liverpool have won just one of the last 11 league meetings against Arsenal.

The Reds have won only one of their last seven league games at Anfield - a victory over Chelsea at the end of last season.

The last time Liverpool failed to win at least one of their opening three Premier League games was in 2003.

In among the mediocrity surrounding him, Sterling was again creating a good impression and he almost produced an equaliser with a neat turn inside the box and a powerful shot against the outside of an upright.

The power of Diaby was a feature of the first half and another run through the heart of Liverpool's defence should have brought a second Arsenal goal, only for Olivier Giroud to somehow sweep a simple opportunity wide.

Liverpool appealed for a penalty when Suarez clashed with Per Mertesacker, who had been booked early on after another collision with the Uruguayan, but referee Howard Webb angered The Kop by waving play on.

Reina needed to be alert to block a shot from Kieran Gibbs at his near post and from Carl Jenkinson's long-range effort.

Suarez was fighting a lone battle against Mertesacker and Thomas Vermaelen but at least offered Liverpool some hope with a rising drive that was touched over by Vito Mannone.

This was snuffed out when Cazorla added Arsenal's second after 69 minutes. The Spaniard's shot carried plenty of power but Reina should have done much better than merely help it into the net.

Liverpool's lack of threat will have alarmed Rodgers but at least substitute Jonjo Shelvey, on for debutant Nuri Sahin, was prepared to test Mannone, twice bringing saves with efforts from distance.

Anfield was deserting rapidly as the final whistle was blown - optimism for Wenger and a desperately poor start for Rodgers.

"The sharpness gets better from game to game and we looked solid and scored two good goals.

"I believe it is encouraging, playing at two difficult away games so I am pleased. We missed opportunities on the counter-attack at the start of the game but we had a convincing team performance. As long as you don't concede, everyone feels better but I credit the whole team.

"Abou Diaby gets better every game but we need to be cautious with him because he has had so many injuries. He can have a little breather in the international break.

"Everybody understood quickly Cazorla would not need six months to settle. Lukas Podolski is deadly when he gets a chance. I am pleased for them."