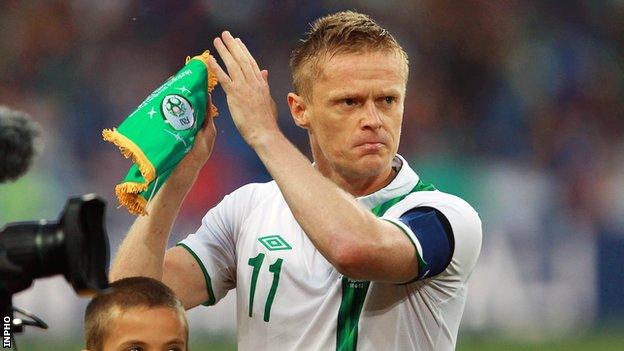 Republic of Ireland winger Damien Duff has announced his retirement from international football.

The 33-year-old only made his decision in the last 48 hours after holding talks with Giovanni Trapattoni.

Duff made his 100th and final appearance for the team in the Euro 2012 defeat to Italy in June.

Duff follows Shay Given, the Republic of Ireland's most capped player of all time, into retirement but Trapattoni has persuaded Robbie Keane to play on.

The Republic of Ireland boss claimed prior to the friendly with Serbia earlier this month that he was confident of convincing all four of his veterans - Keane, Duff, Given and Richard Dunne - to continue playing during the 2014 World Cup qualifying campaign.

Yet within 24 hours, Given retired and now Duff has followed suit.

Robbie Keane, who is 18 months younger than Duff, has agreed to keep making the long trips from Los Angeles to Europe for Ireland's World Cup fixtures.

Dunne is also expected to make himself available, even though he misses the opening qualifier against Kazakhstan with a groin problem.

"I found it very difficult to make this decision, not least for the respect in which I hold Giovanni Trapattoni," said Duff on Friday.

"I have enjoyed so many good times in the green jersey and want to thank everyone involved, especially the fans, for making the last 14 years so special.

"I want to wish Giovanni, Marco (Tardelli) and everyone involved with the Irish team every success for the future and will be supporting them every step of the way."

Trapattoni said Duff will be "missed by us and by Irish fans everywhere".

"He was immensely skilful and a great example to the players who come after him."

Robbie Keane and Marc Wilson come into the squad for the qualifier against Kazakhstan on September 7 and friendly with Oman on September 11, after both sat out the 0-0 friendly draw with Serbia last week.

However there is still no place in the squad for Stephen Hunt, who has been omitted again, despite being a part of the Euro 2012 squad.

There are also no places for Wes Hoolahan or Anthony Pilkington.