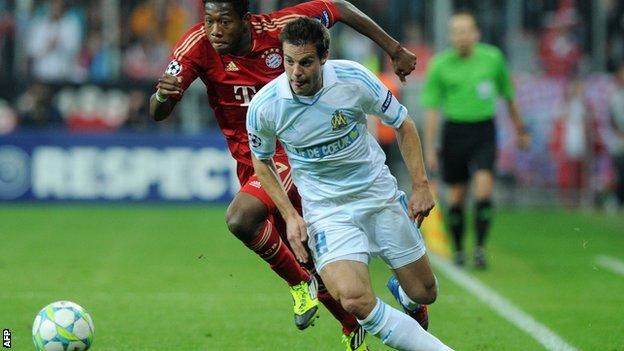 Chelsea have completed the signing of Spanish defender Cesar Azpilicueta from Marseille for an initial fee of £6.5m.

Right-back Azpilicueta, 22, started his career with Osasuna and has represented Spain at various youth levels and played at the Olympics this summer.

He missed Marseille's Europa League qualifier against FC Sheriff Tiraspol on Thursday as he travelled to London to complete the deal.

Chelsea have not revealed the length of the contract for Azpilicueta.

A statement on Chelsea's website read: "Chelsea is delighted to announce the signing of Cesar Azpilicueta.

"The 22-year-old right-back, who recently represented Spain at the London Olympics, arrives at Stamford Bridge following a two-year spell in France's Ligue 1 with Marseille."

Azpilicueta made the last of his 69 appearances for Marseille in last weekend's 2-0 victory over Sochaux.

He joined the French club in 2010 from Osasuna, and although he suffered a serious knee injury in his first season there, he went on to establish himself as the club's first-choice right-back.

Azpilicueta is the fourth Spaniard at Stamford Bridge, linking up with compatriots Juan Mata, Oriol Romeu and Fernando Torres.

His arrival comes after Wigan Athletic accepted a £9m bid from Chelsea for forward Victor Moses.