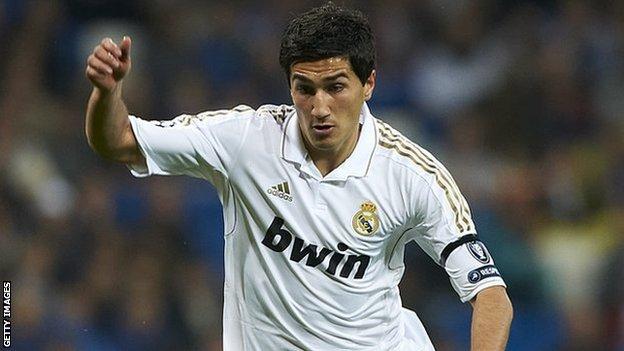 Liverpool have completed the signing of Real Madrid midfielder Nuri Sahin on a season-long loan after Arsenal ended their interest.

The Reds offered to pay a larger proportion of the 23-year-old's £115,000 a week wages, swinging the deal in their favour.

Fast fact: Sahin was voted the best player in the Bundesliga in a poll with Kicker magazine after helping Dortmund to the German league title in 2010-11.

Sahin, who has 31 caps for Turkey, has passed a medical ahead of Sunday's match against Manchester City.

"I hope it will be a nice year with trophies," said Sahin.

Sahin had been expected to join Arsenal, having privately expressed a preference for the north London club. But the deal stalled when Real and Arsenal could not agree a £14m option to buy the player at the end of the loan.

Liverpool and Real then agreed a deal, with Sahin's agent meeting Liverpool officials earlier in the week to agree terms.

"It makes me proud to have joined such a big club like Liverpool," added Sahin.

"After the first conversation we had, I was left impressed by [manager] Brendan Rodgers. He told me about how he wants to play football and what the goals are he wants to reach with Liverpool.

"I am looking forward to meeting the fans."

Real boss Jose Mourinho had given the go ahead for Sahin to move to the Premier League after the playmaker struggled to make an impression at the Bernabeu since a move from Bundesliga champions Borussia Dortmund last summer.

Sahin signed a six-year deal with the La Liga outfit but made just 11 appearances for them last season as they won the Spanish league title.

In an interview on Liverpool's website, Sahin revealed he was at the Ataturk Stadium when Liverpool came from 3-0 behind to beat AC Milan on penalties and win the Champions League in 2005.

"That year, I won the European under-17 championship with Turkey, so we were invited by the Turkish Football Federation to watch the game," he said.

"We were sitting near to where the Liverpool fans were and it was just a crazy, crazy night. It was then I saw what football and Liverpool Football Club means to the people."

Rodgers said he was thrilled to have secured Sahin's signature for the season.

"We are delighted to welcome Nuri to Liverpool and also to say thank you to Real Madrid for loaning us such an exciting talent," said the Liverpool manager.

"Nuri Sahin is a player with great technique and motivation and someone who will fit in smoothly to our playing model."