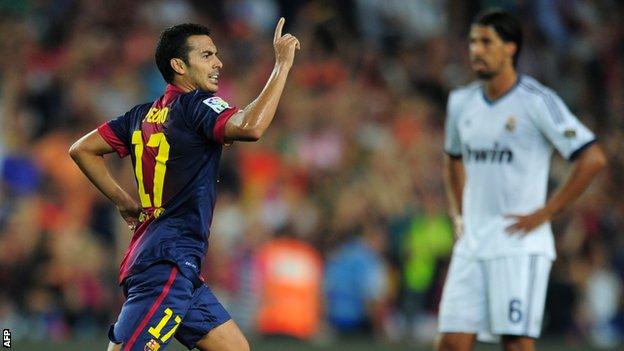 The Spanish Super Cup remains delicately poised after Barcelona secured a 3-2 win against Real Madrid in a pulsating first leg.

Real's Cristiano Ronaldo first headed in a corner, which Pedro levelled immediately from the kick-off.

Real Madrid and Barcelona meetings in 2011/12

The match was the first time the two sides had met since Pep Guardiola ended his reign as Barcelona manager and was replaced by assistant Tito Vilanova.

Jose Mourinho's Madrid side looked to pounce on the counter attack from the off, and could have gone ahead if former Manchester United winger Ronaldo had played a firmer pass to Karim Benzema on the edge of the penalty box.

Reigning Fifa World Player of the Year Messi - already on the receiving end of a strong challenge from the visiting defender Fabio Coentrao - then blazed over from 20 yards before Pedro tested Iker Casillas.

The first half continued in the standard tempo of a 'Clasico' as Spanish Cup holders Barcelona dominated the ball with their relentless 'Tiki-taka' passing, and La Liga champions Real threatened with their incisive speed and power on the break.

Mourinho has faced Barcelona 12 times since taking charge of Real Madrid. He has lost six, drawn four and won two.

Their patience was rewarded in the 55th minute as Ronaldo freed himself from marker Sergio Busquets and headed in a Mesut Ozil corner to claim a goal in his fourth successive visit to the Nou Camp. Barcelona hit back one minute later as Javier Mascherano played in Pedro to slot under Casillas for a quickfire equaliser.

Messi then put Barcelona ahead from 12-yards after Sergio Ramos' clumsy foul, and midfield pair Xavi and Iniesta produced the move of the night as their artistry cut open Real for the latter to score a potentially decisive third goal.

Barcelona seemed to have the trophy sewn up, before Valdes dawdled on the ball and substitute Di Maria robbed him to slot home a vital away goal.

Mourinho jabbed Vilanova in the eye in a melee at the end of last year's Super Cup, but there was no repeat of that controversial scene on the final whistle ahead of next week's decider.